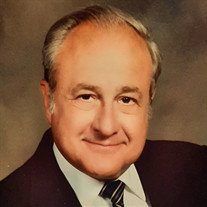 William “Bill” Biddison McMurry of Castle Pines, Colorado passed away peacefully with his daughter and son at his side on December 8th, 2021. He was 88 years old. Bill was born in Tulsa, Oklahoma on June 26th, 1933.

Bill attended Central High School in Tulsa. He served his country in the US Navy and graduated from the University of Oklahoma. Afterwards, he moved to Denver, Colorado to help his father with a family business. It was there that he met his wife Barbara Joyce Strachan. They were married in Denver, Colorado at Saint John’s Episcopal Church in June of 1960. Bill and Barbara had a son and a daughter. Weekends were enjoyed as a family in Dillon, Colorado at the family condominium. Bill started his own insurance agency and continued in this field until his retirement.

Bill enjoyed serving others through Rotary International and served as District Governor from 1991 to 1992. He had 57 years of perfect attendance. Bill’s favorite activities included fishing, boating, hunting, travel, and collecting antique cars.

Private family services will be held.
To order memorial trees or send flowers to the family in memory of William "Bill" McMurry, please visit our flower store.