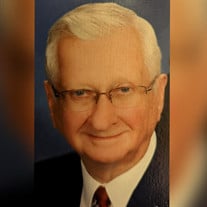 Verlin Gene Spatz, 88, of Highlands Ranch, CO died August 23rd, 2021. He was born June 15, 1933 in Lebo, Kansas. His brothers Robert Glendene, Lloyd DeWayne, LaRon D. Spatz, his sister Dorla Sue Swartz, and his beloved son, Kevin Alan Spatz, preceded him in death. When Gene turned 18 he enlisted in the Navy where he spent four years in Newfoundland during the Korean War era. Afterwards, he attended Kansas State Teachers College of Emporia where he obtained a Bachelor of Science in Business. While in college, he met Patricia Ann Coleman and they married shortly after they both graduated. After moving to Denver and starting their new life, they spent years waiting to be graced with their son, Kevin. Gene spent his working days as a CPA for the Banking Industry and retired at 65 from the Colorado Teacher's Credit Union (now Westerra) in Denver. Kevin gave Gene and Patricia their two beloved grandchildren Philip and Elizabeth. Gene shared his values of hard work, family and sense of exploration with all. He and Patricia spent their time devoted to being loving and attentive parents/grandparents for their family in Cincinnati, Ohio. They visited at least twice a year for each of their grandkids' birthdays, once in April and again in July. They often visited for Kevin’s birthday in October and switched off Christmases between Denver and Cincinnati. Gene also was a fanatic of the Colorado Rockies and the Denver Broncos, for years they attended as many games as possible. As they grew older, Gene and Pat still never missed a game on TV and he actively stayed up with how each of the teams were doing. Gene and Pat also did some world traveling in their later years.

Gene is survived by his wife Patricia Ann Spatz, his sister Carolyn Davidson, his daughter-in-law, Carol Spatz and grandchildren Philip and Elizabeth Spatz, and many nieces and nephews in the Kansas City area. A memorial service will be held at 11:30am on Saturday, December 4th at Heflebower Funeral Services, 8955 S. Ridgeline Blvd., Highlands Ranch, Colorado 80129.
To order memorial trees or send flowers to the family in memory of Verlin Gene Spatz, please visit our flower store.