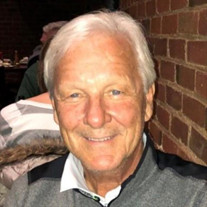 Terry Michael Sarniak was born on March 14, 1949 in Detroit, Michigan, the second child of 3 children born to Chester and Adele Sarniak. He departed this world on July 25, 2020 after a 2 ½ year battle with cancer. A fight characterized by courage and inspiration to all who knew and loved him. These dates may bookend his life but do not in themselves define him as a person nor limit his legacy.

He was the beloved husband of Tona, father and friend to Stacey and Becky, devoted grandfather to Owen and Olivia, brother to Larry and Patti (Greg), brother-in-law to Angie (Doug), and the “cool” uncle to numerous nieces and nephews. Terry was intensely proud of his Polish heritage. He loved golfing, fishing and anything which he could partake in outdoors. An accomplished cook, to the benefit of his family, he tended to watch perhaps a little too much Food Network. He received his Masters in Science from Wayne State University in 1979 and worked as a geologist/geophysicist for Texaco/Chevron for over 30 years. During this time he worked many different basins, his favorites being his time working offshore Angola, Africa and East Texas. He mentored many during his life, both directly and indirectly. With his family he shared his love of cooking, golfing, fishing and traveling. He inspired them to be the best they could be, never settle, and to take risks, just as he lived his life.

He was intelligent, proud, private and funny. His favorite movies included Caddyshack, for which he knew each memorable line, The Martian, and Bourne movies. His love of music was varied from Stevie Ray Vaughan to Frank Sinatra. He enjoyed traveling having been to England, Scotland, Paris, Brussels, and Rio de Janeiro. His favorite place to vacation were all-inclusives in Cancun, Mexico, lying under a palapa on the beach and listening to the waves.

The world is less bright by his absence. The heavens rejoice in his arrival.

The family wishes that in lieu of cards or flowers donations be made to the Lustgarten Foundation in Terry’s name.
To order memorial trees or send flowers to the family in memory of Terry Sarniak, please visit our flower store.