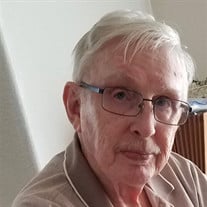 Terry Ray Roberts, 83 of Morrison, CO, passed away on November 23, 2019 at his home.
Terry was born on July 18, 1936 in Nemaha, Nebraska to Alvin and Maxine (Kelly) Roberts. He graduated from Odebolt High School in Odebolt, Iowa in 1954. He served his country for 13 years in the Air Force. He worked in the field of computers and enjoyed in depth geneology.
Terry is survived by his wife, Margaret "Marge" (Meyer), his children; Jeffery, Susan, Thomas, Jill and Maura, two step sons; Douglas (Shawn) Boll and Stuart Boll, his sisters; Sharon Comstock and Jeanette Webber, and his step-grandchildren; Dylan Boll, Grant Schwarten, and John Boll.
To order memorial trees or send flowers to the family in memory of Terry R. Roberts, please visit our flower store.