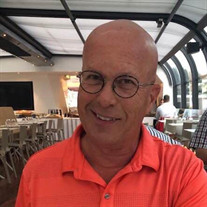 Terrell (Terry) Lee Bowen, 61, of Fayetteville, Arkansas passed away suddenly in a tragic motorcycle accident on August 27th in Aspen, Colorado. He was born on February 7, 1958 in Poplar Bluff, Missouri.
Terry graduated from Missouri State University with a degree in Accounting in 1979. He went on to obtain his CPA in 1983. Terry worked as a business executive and consummate entrepreneur throughout his professional career. Nothing made him happier than helping others succeed in both personal and professional endeavors. Most recently he enjoyed his executive coaching role as Vistage Chair for the Northwest Arkansas chapter of Vistage International.
Terry was a devoted husband, father, and mentor to many. He was a faithful man and active member of Fellowship Fayetteville. He also started the Northwest Arkansas chapter of Men’s Golf Fellowship. Terry was a huge sports fan and suffered from a severe case of Arkansas Razorback fever. Woo Pig Sooie! He also enjoyed fishing, hunting, traveling, and being around family. He even managed to find the time to complete 13 marathons.
Terry is survived by his loving wife Suzette Bowen of 13 years. He is also survived by his four children, Scott Thouvenot and wife Courtney, Daniel Thouvenot and wife Renee and granddaughter Adeline Thouvenot, Brooke Thouvenot and wife Lauren, and Grace Thouvenot. Brother, Robert Ivy, brother, Jurgen Himpler, and niece, Kaitlin Ivy.
His memorial service will be held on September 7th at 11:00 at Fellowship Fayetteville 3447 AR-112 Fayetteville, Arkansas 72704
To order memorial trees or send flowers to the family in memory of Terrell L. Bowen, please visit our flower store.