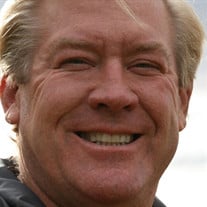 Steven Leslie Randell passed from this earth on January 5, 2022. He was 61 years old.

Steve was born on June 13, 1960 in Carrollton, Illinois, the second child and only son of Roscoe and Marjorie Randell. At the age of four, his family moved to Urbana, Illinois, which became his hometown. Steve was born with the gift of gab and could talk to anyone about almost anything. From a young age, Steve was interested in sports, music and humor. He excelled at high school football and baseball. Steve attended the University of Illinois at Urbana-Champaign, where he joined Sigma Chi fraternity and made many of his lifelong friends. He graduated with a BS in Accountancy in 1982. After graduation, Steve moved to Denver, Colorado, working first in public accounting and then in the cable television industry. Steve’s career in cable took him from Colorado to Indiana, Virginia, New Jersey and Ohio, before he settled back again in Denver permanently in 2003. In recent years, Steve managed distribution processes with Amazon.

In 1991, Steve married Catherine Flanagan. While that marriage did not survive, it produced two amazing children, Caitlin Rose and Matthew Cole. Steve found love again with Jenny Noe and they married on January 21, 2012 at Garden of the Gods in Colorado Springs, Colorado. Together, they have two beautiful daughters, Adeline Grace and Magnolia Mae.

Steve loved to laugh, talk about music, politics and sports. He was the living embodiment of the phrase “never met a stranger”. He was passionate about his family, his friends, the Fighting Illini, the St. Louis Cardinals and the Denver Broncos. He was a proud dad to his daughters and son.

He is survived by his wife, Jenny, their daughters, Addie and Maggie, his daughter, Caitlin and son, Matt, his sisters, Lorraine Kordik and Linda (Val) Dean, numerous extended family members and many friends. He was preceded in death by his parents and his first wife, Catherine Flanagan Randell.

Steve will be remembered for his wit, charm, memory and story-telling. As his friends and family will attest, Steve was larger than life, and the space he left will be impossible to fill. We are bereft at his passing, but take comfort that he is with his Lord and Savior.

A memorial service is planned for 2PM in the afternoon of February 11, 2022 at Joy Lutheran Church, Parker Colorado.
To order memorial trees or send flowers to the family in memory of Steven L. Randell, please visit our flower store.