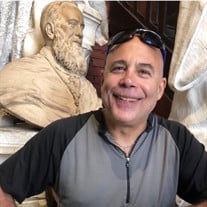 Steven Horwitz, age 62, passed away peacefully on Wednesday, November 18th, 2020 at Denver Hospice. He was born on September 22nd, 1958 in Great Neck, New York to Gerard and Rhoda (Margoils) Horwitz. Steve opened his first business when he was 21 and remained self-employed until his death.

Having a true passion for life, Steve was always on the go. After his marriage to Beth, they quickly moved to Colorado, where he immediately adapted to the outdoor lifestyle. Steve’s life revolved around his cravings for adrenaline, whether it be skiing, snowboarding, dirt biking, mountain biking, hiking, or sailing. He spent his additional free time taking his three children on numerous adventures, exploring new restaurants, volunteering his time to teach under-privileged children how to snowboard, attending concerts, and listening to the radio personality Howard Stern. Steve was also an avid traveler. During the last three years of his life, he was lucky enough to travel to 14 countries throughout Europe and Asia. Steve’s positivity and passion for life radiated to everyone that had the pleasure of knowing him. He will be dearly missed by all who knew him and his zest for life.

Steve was preceded in death by his parents Gerard and Rhoda. He is survived by his three children, Stacee (25), Alana (22), and Josh (21); his ex-wife, Beth; and his fiancée, Tualek.

Steve’s family will be holding a Celebration of Life service on Sunday, November 22nd at 1:00pm at Highland Heritage Regional Park (9651 S Quebec St, Highlands Ranch, CO 80130). Masks will be required throughout the entirety of the services.
To order memorial trees or send flowers to the family in memory of Steven Horwitz, please visit our flower store.