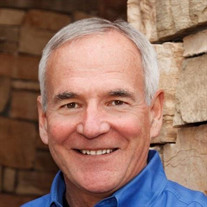 Stephen Joseph Dow, age 68, passed away on August 13, 2022, doing what he loved, mountain biking. That day he rode his usual, challenging ride near Roxborough to the top of the Ringtail trail, over a mountain with steep switchbacks. On his way back, Steve died of a heart attack on Sharptail, the portion of the trail that connects the open space to the south of Roxborough Park.

Steve was preceded in death by his father Robert and his mother Joann. He is survived by his wife Mary, his brother David, his sister Barbara, his dog Snicker, and his many nephews, nieces and cousins.

Steve was born in Omaha, Nebraska, on October 12, 1953. He was raised in Omaha until his family moved to Evergreen, Colorado and then to Littleton, Colorado.

Steve began his building career in Aspen, Colorado in 1973 working for Alpine Construction; he completed many projects in the towns of Aspen and Snowmass. Always an avid biker from his youth when he rode his first “banana seat” bike, Steve would ride his road bike from the town of Aspen to the top of Independence Pass most every day in the summer after work. With the feeling of freedom Steve got from riding, he believed that bicycles are magical.

In 1975 Steve moved from Aspen to Denver to attend the University of Colorado. In Denver, Steve reconnected with Mary Hiatt, after their initial meeting in the late 60’s, and they began dating. Steve and Mary married young in 1976. Theirs was a loving marriage that was full with fun and adventure and lasted 46 years.

After graduating, Steve became a project development manager for a major Denver home builder where he oversaw the construction of hundreds of single family homes. In 1987 Steve served as president of a Denver-based national general contracting and construction management firm which developed and built commercial projects throughout the United States and Canada. Godiva was one of his contracts and he traveled throughout the country to oversee the finishing of their chocolate stores. Steve also went multiple times to Malaysia where he worked on commercial shopping malls where he enjoyed learning about the culture and the food.

In 1996 Steve founded his own building and development company specializing in custom home building. During his career he developed long-standing relationships with his clients and was loved by his subcontractors and suppliers. The hundreds of custom homes and happy homeowners in the Roxborough area, the front range foothills, and the Denver metro area will always be Steve’s legacy.

An exceptional athlete, an avid sportsman, and a passionate lover of the Colorado mountains, Steve could always be found adventuring when he was not at work. He started each day in his home gym with an hour workout, a discipline which lasted over thirty years.

In his younger days, he was an avid golfer who enjoyed playing golf at many of the top courses across the United States. He and Mary also owned a boat, and Steve was an accomplished water skier. Many a Sunday morning would find Steve and Mary out on the water boating, water skiing, and picnicking with friends and family. Their other passions were hiking, skiing, especially Aspen Mountain and Snowmass, snowshoeing, and, biking. Mary and Steve’s passion for adventure led them to most every Colorado town to find new adventures.

When his back would not permit as much golf and waterskiing, Steve found his longest-lasting passion in the sport of mountain biking. His love of the mountains took Steve and Mary on the hunt for new single-track mountain bike trails, the steeper and more scary, the better! And the adventures he had! Once he came inches from hitting a baby bear. Another time he had to lead a group of mountain bikers across a field with four bears. His motto became, “You’re lucky when you get to bike with the bears!”

“Climb Every Mountain” was Mary and Steve’s dream, and they lived to the fullest when they adventured on their weekends in the Colorado outdoors; they squeezed every minute out of their fun times together.

Steve’s other hobbies were his cars and his dogs. He owned a classic MG for over thirty years, and he was always interested in new car releases and in car reviews.

Mary and Steve have always had a deep and abiding passion for dogs; they got Sequoia, a golden retriever, soon after they bought their first home together in Denver. After a few years they built a first and then a second home in Roxborough Park, an area with so much open space in the 1980s that the dogs had room to roam. While living in Roxborough they owned Brandon, a Wheaton terrier, Jazzy, an Airedale terrier and Snicker, Steve’s baby and beloved Standard Poodle.

Even though his co-workers often defined Steve as a “crusty builder,” Steve had a quiet and enduring love of nature. He especially loved the flower gardens Mary planted in their courtyard. Daily he would nurture the plants and monitor the growth. Last year while cutting back a shrub, he exposed a nest with eggs. Every day Steve would hover at the window watching the progress of the mother hatching the babies until they all flew away.

But there was another memorable side to Steve; he definitely loved a good party! Steve and Mary were the ultimate party host and hostess, and Steve was in his element when he was BBQing for his guests. At a party and after a few glasses of wine, look out when Steve started to sing! “Volare’, Oh, Oh, Oh, Oh!” A party was simply not a party without Steve.

In lieu of flowers, the family asks that to honor Steve, remember his motto: “Never give up, and push yourself as far as you can go”. Also, Steve and Mary had a dream of living on their beautiful, three acre lot at the base of Mt. Princeton outside of Buena Vista where they could both bike and hike their beloved Colorado Trail which could be accessed just minutes away from their property. If you wish, you can donate to the Colorado Trail Foundation at coloradotrail.org

“The Hills Are Alive”, so the next time you are in the mountains, put on your WILD socks, look to the heavens, and say a prayer for this die-hard mountain biker
To order memorial trees or send flowers to the family in memory of Stephen Joseph Dow, please visit our flower store.