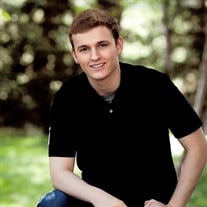 Spencer Jameson Clark, age 24, passed away unexpectedly in Littleton, Colorado on October 1st, 2022. Spencer was welcomed into the world at Swedish Medical Center in Englewood, Colorado, July 23rd, 1998, by his loving family.

Anyone who has had the privilege of being in Spencer’s life knew him to be thoughtful, compassionate, a loving son, grandson, nephew, brother, friend and devout in his faith. Well read, his curious mind and exuberance as a young man made him a joy to be around and always good for deep, meaningful conversations.

Spencer’s tender heart and love for animals was always clear. His mother reflects on a bittersweet memory of Spencer seeing a stranded kitten in the road one recent evening, pulling the car over, and walking over to check on and help his newfound floof friend. When the Clark family adopted their newest furry family member, Daisy, in 2007, Spencer was instantly smitten. The two quickly sparked the best of friendships and grew to be quite inseparable. Her favorite place to sleep became right between Spencer’s legs. It wasn’t comfortable, but he couldn’t bring himself to wake up and move his sweet, fluffy companion.

Spencer’s family fondly remembers being in awe observing his intelligence, creativity, and passion for building things with his hands begin to take shape as a little boy. By the age of 5 he had taken a greater interest in crafting his own toys out of odds and ends around the house (with incredible detail and stunningly accurate scale) rather than simply getting a cookie cutter toy off the shelf at the store. He took great pride in his craftsmanship and, upon completion, would always excitedly present his newest creations to his brother, mother, and father, eager to see their reactions.

Although his ingenuity and desire to create never waned, as he grew older Spencer explored new interests such as playing lacrosse and flag football, running cross country, joining chess club, and going out for rounds of golf with Dad. Although he did tend to return with some bumps and bruises, he shared wonderful memories with his brother and childhood friends in the Rocky Mountains for ski and snowboarding adventures. Also taking a keen interest in gaming, Spencer took every opportunity to initiate some brotherly competition over his favorite racing, Star Wars, and James Bond games with his big brother. Although six years older than Spencer, Michael begrudgingly admits that it wasn’t often that he was able to best his little brother in their favorite games over the years.

While there are too many special memories shared between Spencer, his family, and friends to share here, a few of his (and their) favorites were:

Attending camp IdRaHaJe, where he was able to explore his faith and love for the outdoors. At camp, Spencer and his friends got to experience non-stop excitement as they enjoyed campfires, archery, rock climbing, zip-lining through the mountains, and playing capture the flag.

Trips to a family favorite destination in Colorado, Grand Lake, where days spent boating, go-karting, and exploring the town always seemed to go too fast. Spencer especially cherished the time he was able to spend here with his dear grandparents, Paula and Chuck, and aunt and uncle, Shelli and Rick.

Vacations to Disneyland and Disney World, where Spencer and his brother made sure to jump back
in line for the Star Wars ride as many times as time permitted and Mom and Dad got to let out their inner-child, enjoying the rides and attractions as much as they did seeing the joy and wonderment in their son’s eyes as they explored the parks.

A family cruise down the coast of California and Mexico. After being let in on the plans for this trip on Christmas the year prior, the boys spent the time in between in great anticipation of the adventures to follow. This vacation was Spencer and his brother’s first time adventuring out of the country, making memories exploring coastal cities and swimming in the Pacific.

A cruise that Michael took Spencer on as a gift for his graduation in 2017. They had the time of their lives together in the Caribbean, cliff jumping serene, tropical waterfalls, ATV’ing through the jungles of Tulum, parasailing in the Gulf, exploring the Cayman Islands, and horseback riding in the coastal waters of Jamaica. - All beautiful memories that Michael reflects fondly upon and will cherish for the rest of his days.

After graduation from Chatfield High School in 2017, Spencer was excited to apply his love for art and science in a new career. He soon found a job to suit his passion for building and love for science at Lockheed Martin, where he studied to pass a rigorous training & certification course, going on to work as a Technician building circuit boards for various satellite and aerospace projects underway at the company. Later being promoted to a Quality Control Inspector, using his newfound expertise, Spencer worked to ensure finished products were up to standard and performed properly.

Spencer is survived by his mother and father, Trini and Gerald Clark, older brother Michael Clark, grandparents: Charles and Paula Hankins, Ted and Debi Grundmeier, aunts and uncles: Shelli and Rick Moseley, Tamara and Shad Morgheim, Jarrid and Leticia Gross, and Jim Clark, and cousins, Cole, Brianna, Quinlan, Aiden, Michel, Alicia, Michaella, and Camrie. Our family is devastated and heartbroken by this tragic loss. He is preceded in death by grandparents, Jack and Marilyn Clark, great-grandmothers, Rose Hill and Edna White, and beloved fur-ball, Daisy.

Please hug and tell your family members how much you love them as often as possible. Cherish the moments with the ones you love and live each day as if it is your last. The world needs more of that.

If you wish to make a donation in honor of Spencer, please consider contributing to Second Wind Fund https://thesecondwindfund.org/ or to MaxFund https://maxfund.org/ .

The family will be holding a Celebration of Life Service at Mountainview Christian Church on Thursday, October 20th, at 1:00 pm. A reception will be held following the service. Address: 40 E Highlands Ranch Pkwy, Highlands Ranch, CO 80126
To order memorial trees or send flowers to the family in memory of Spencer Jameson Clark, please visit our flower store.