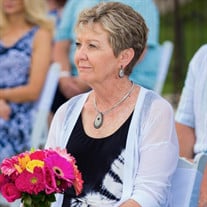 Sharon Stephenson, 75, of Centennial, CO, passed away on October 20, 2022, at her home surrounded by family and friends. She was born on June 17, 1947, in Denver, CO to Richard and Shirley Harding. She graduated from Littleton High School in 1965 and went on to pursue a Math degree at Colorado State University in Fort Collins. During the summers, she worked at a Dude Ranch in Wyoming where she met her ex-husband, Alan Stephenson. They married in 1967 and she joined him in Wyoming. They then moved to San Antonio, Texas where she was very involved in charity work, and their first daughter was born, Cynthia Jean, on February 17, 1971.

In 1972, they moved to California where the beginnings of life long friends began. She had her second daughter, Diane Melissa, on November 6, 1975 in Cupertino, CA. She was President of the Newcomer’s Club and an active member of Kona Kai Tennis and Swim Club. She played lots of tennis and had cherished friendships. She remained in California until she moved back to Colorado in 1995 to be closer to family.

She joined the Crate and Barrel Company where she worked for 23 years and made wonderful friendships. She retired in 2019. She was an avid golfer and enjoyed volunteering at The Assistance League of Denver. She enjoyed playing Mah-jong with her friends, attending monthly dinners with Crate friends, and deck dinners with her neighbors, and of course, plenty of Happy Hours with all sorts of friends. You would usually find her with a Blue Moon in hand and a giant smile.

She was thrilled to have her whole family with her in 2010 as Diane was in Breckenridge and Cindy moved to Colorado with her daughters, Taylor and Sadie. Sharon was the best fan in the stands supporting her granddaughters in their sports endeavors. She was a huge part of her grand-daughters life and enjoyed being able to be there for all their events. She was such a special piece in her family and friends’ lives and will be dearly missed. Sharon was preceded in death by her parents, Richard and Shirley and her brother, Rick Harding. She is survived by her daughters, Cindy and Diane; son-in-laws, Gordon and Martin; granddaughters, Taylor and Sadie; sister-in-law, Dey, niece and nephew, Eric and Lauren; Aunt Polly; cousins Mel Jr and Cathy, Greg and Nancy, Dan and Dianne, and many more.

Sharon’s family will be holding a funeral service at Dixon Chapel at Cherry Hill Community Church on Friday, November 11, 2022, at 2:00pm with a gathering after at the church. Please join us in celebrating Sharon’s life, sharing stories, and reminiscing. In lieu of flowers, please consider making a donation to the Colorado Melanoma Foundation.
To order memorial trees or send flowers to the family in memory of Sharon Stephenson, please visit our flower store.