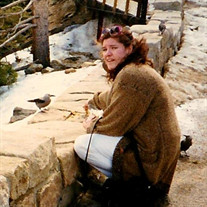 Sharon Kathaleen Morris Champion, age 57, passed away July 31st, 2019. Sharon was born on August 26th, 1961 in Tucson, Arizona to Thomas William Morris and Mary Rita Morris. She grew up in Denver, Colorado. Sharon married Charles Richard Champion on February 14, 1981 in Houston, Texas. They had two children, Kenneth Allen Champion and Richard Thomas Champion.
She was preceded in death by her parents, Thomas and Mary, as well as her brother, Neal. Sharon is survived by her husband, Charles. She is also survived by her children, Kenneth and Richard; grandchildren, Gabriella, Chase, and Chance; nephew, Callen; and many more extended family and friends. The world was a better place with Sharon in it. She will be greatly missed. The family will be holding a private memorial service.
To order memorial trees or send flowers to the family in memory of Sharon Kathaleen Morris Champion, please visit our flower store.