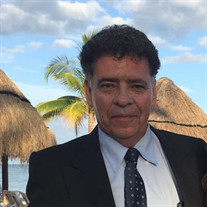 Salvador Bonilla, age 70, passed away at UCHealth in Aurora, Colorado on June 11, 2020. He was born on May 10, 1950 in Jalisco, Mexico to Manuel and Emilia Bonilla. Salvador leaves behind his beloved wife, Juventina Madera Bonilla and their children, Sal, Angel, Susy, and David Bonilla.

His life story is truly amazing. Salvador was born and raised in Minillas, a small village in Jalisco, Mexico. He came from a big family -- one of 11 children. From humble beginnings, he started working when he was just two years old on his family’s farm and never missed a day of work.
He married Juventina in 1975 in Mezquitic, Mexico and started a family. He aspired to give his children a better life. He believed in the American Dream and came to this country in 1969 when he was 19 years old. He left his footprint throughout Colorado and settled in Denver. Salvador was the ultimate underdog, but there was no barrier he could not overcome to succeed. Salvador often mentioned how proud he was to become a U.S. citizen. He loved this country.

Salvador pursued an education and was a brilliant business man. He became an entrepreneur by founding Multi Contractors, Inc. in the 1980s and Stone Distribution Center in 2005. These businesses are still operating to date by his family members. The work of his hands can be seen in buildings and construction all over the city of Denver. Salvador owned and built his home where he lived for over four decades with his wife and raised his children.

Salvador was the kind of man that never gave up. He was genuine and respected by those who knew him. He made lifelong friends that consider him a brother, a father and a mentor. Anyone who had the opportunity to talk with Salvador would leave the conversation wiser, in laughter, starting a business, or maybe even buying some property. Salvador not only creatively pursued his own dreams, but encouraged the dreams of others too.

He was a big believer of education and supported outreach programs to the underserved members of our community. He also came from an agriculture background and planted and cared for his current 54 healthy peach trees, several pear trees, apple trees, and grape vines.

He was a man of faith that gave thanks and praise to God for all He blessed him with. He was a pillar of strength for his wife, children, grandchildren, brothers, sisters, nephews, nieces, aunts, uncles and friends. His children talk about how he was always there for them and his ability to listen with intent. He gave people valuable advice and cared about the little things. You could talk to Salvador about anything. He was kind, loving, compassionate and understanding.

In 2015 and 2016 he suffered some health setbacks but he stayed strong by working hard and keeping a positive attitude for nearly five years. He was a walking miracle. He encouraged us to all have faith and pray, saying, “The good Lord will provide.”

Salvador Bonilla was no ordinary man. He is greatly remembered and missed by those who knew his name. He will forever be in our hearts.
Please follow the Facebook group “Remembering Salvador Bonilla” to share your stories.
https://m.facebook.com/groups/3114463905266116
To order memorial trees or send flowers to the family in memory of Salvador Bonilla, please visit our flower store.