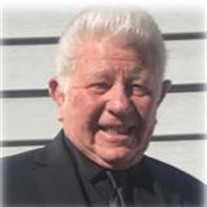 Ron Trujillo passed away peacefully in his own home on Wednesday, October 13, 2021. He was 81.

Ron was born in Denver on October 2, 1940 and was the oldest of 14 children, whom he served as a father-figure, brother, and mentor to his siblings well before becoming a grown man himself.

In 1959 Ron graduated from Sheridan Union High School. He was an all-star athlete and Letterman, receiving 10 letter awards and competed in the Colorado State Wrestling Championship Tournament. After graduation, Ron had plans to become an educator. He attended at the University of Denver as a full-time student while working full-time in the smelting and refining industry. However, he sacrificed his education to support his many siblings and help care for his grandparents, Ciria (Hidalgo) and Balentin Trujillo.

Ron married Danette (Tibljas) in 1963, and his grandparents, Ciria and Balentin, were Matron of Honor and Best Man at their wedding. They were married for 50 years, an anniversary they celebrated only a few months before Danette’s passing in April 2013. Ron and Danette had three children, Rhonda, Brian, and Angie.

Ron’s passion for athletics continued throughout his lifetime. He was a member of the Colorado Wrestling Officials Association (CWOA) for 23 years and officiated thousands of high school wrestling matches and tournaments. He played on many softball teams as coach, player and umpire. He coached his children’s little league baseball and softball teams, soccer teams, and was mentor to many children outside his own family. In addition, Ron was a Sheridan Volunteer Fireman for many years, served on the Sanitation District for several years and volunteered for the local school district. He retired from Gates Rubber company after 23 years, working in the belt manufacturing and technical specifications division, and he was an integral leader in successfully securing the Colorado AFL-CIO/ labor union in place at the company to protect employees’ dignity and equality, rights and benefits, and by doing so, raised the standard of living and quality of life for all employees and their families.

Ron had so many accomplishments in his lifetime and touched hundreds of lives which continues to have positive impacts on many people even today. He was a selfless person who would give the shirt off his back to anyone in need or who asked. Ron gave everything he ever did 200 percent, and he had a passion for life like none other. Diagnosed with kidney disease at only 43 years old, Ron valiantly and successfully fought the disease through many operations and procedures, including two separate kidney transplants, was treated and beat various cancers several times over, and was successful at dealing with and overcoming the degenerative effects the life-long transplant medications had on his body for 31 years. Through his actions, he showed those around him how to fight for life, love, and hold dear all things that matter most in one’s life. He will forever be our Hero.

People wishing to honor Ron’s life can make donations to the local Colorado chapter of the National Kidney Foundation (NKF):

Toll Free: 1-800-596-7943 www.kidney.org/offices/nkf-serving-colorado-and-new-mexico
To order memorial trees or send flowers to the family in memory of Ron Trujillo, please visit our flower store.