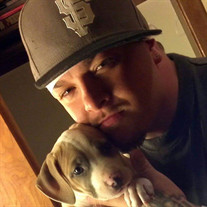 Aaron is preceded in death by his grandparents Gary and Annie, and Donato, and by his auntie Francis, Uncle Walter, and cousin Lynette....


Other Family~
Numerous Aunties & Uncles and Cousins throughout the United States,

Aaron was a loving father of 4 beautiful boys . He loved life and especially his family. Aaron completed his high school and graduated from Lincoln Tech University with a degree in automotive technology in Arlington,Tx Aaron was a self-taught tattoo artist and his penmanship was off the charts, Aaron had numerous talents and skills, Aaron was a social butterfly who always left either a smile or smirk as he was leaving... Aaron enjoyed video games specifically Call of Duty which he was a master of... he was a computer genius and excelled in all areas of electronics. He was an avid compassionate herbal gardener.

Aaron also believe in God and was recently Baptized as an adult...
To order memorial trees or send flowers to the family in memory of Rogelio Aaron Garza Jr., please visit our flower store.