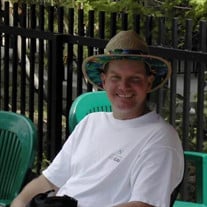 Robert (Rob) Slavin, age 60, went to be with Jesus at his home on January 6, 2022 after fighting a 30 year battle with brain and spine cancer. He was born on April 5, 1961 to Joe and Frances Slavin in Pasadena, CA. He graduated from Quartz Hill High School in 1979 and went on to work in the tech industry where he met and married his wife, Sandy in 1987. Before long, two daughters – Lindsay and Leann – followed.

Rob was a man of many talents and interests. Growing up he participated in many sports including baseball, football, track, cross country, and basketball. As an adult, he enjoyed participating in church leagues, coaching his daughter’s basketball team, and still rooting for his favorite teams – especially in football. Not content to only watch, though, Rob reveled in playing fantasy football. Over the years he coached his daughters in the finer points of fantasy football when they participated in family and work leagues (should have been a coach!). He also participated in the CBS leagues, frequently stumping the experts with his choices only to outperform those same experts week after week.

Rob also had a thumb so green that he managed to grow corn in his front yard of the Antelope Valley Desert as a kid. These talents carried into adulthood, and he loved planting things in his yard. With his diligence and care, his yard matured into an Eden.

More than the activities, though, Rob loved the people around him. Being one of seven kids, he grew up in a large and incredibly close family. Visits from his mother, siblings, and various nieces and nephews were always a highlight! He was also a manager at AT&T for many years and both loved and was loved by those he worked with.

Additionally, he was an incredible husband, father, and grandfather. He joyfully used every Saturday as a chance to take his daughters out and give his wife some down time. Outings included lunch, movies, afternoons at the park, ice cream, and trips to Home Depot for more plants. He also delighted in organizing the family’s entire Christmas each year and doing all of the shopping (his wife found this a huge blessing!). As time went on, he was excited that his family expanded to include his son-in-law, Trevor, and three beautiful grandchildren: Payton, Ashlynn, and Paisley. Rob took so much joy in being a grandpa that he was always the first at the hospital to meet each new grandchild after their birth and enjoyed quality time with each of them as they grew.

Most importantly of all, though, Rob was a man of incredible faith. Faith was one of his gifts, and he always expected the best from the Lord. It was this faith that enabled him to fight his long cancer battle with perseverance and grace. He never doubted that he would be here to raise and take care of his family, and he was right. He selflessly gave of himself to care for his family for more than thirty years before God called him home. His faith also led him to never fear and to trust God to meet any other needs. This incredible faith has shaped his family – both nuclear and extended – and friends so deeply that it is his biggest legacy.

Rob is survived by the love of his life, Sandy; his two daughters, Lindsay and Leann; his son-in-law, Trevor (husband of Leann); his three beautiful grandchildren, Payton, Ashlynn, and Paisley (affectionately known as Bubba, Sissy, and Peanut); his mother Fritz; his siblings Jeanine, Joe, Terry, Maureen, Mike, and Dan; and many siblings-in-law, nieces, and nephews. He is preceded in death by his father, Joe, and his niece, Katrina.

I have fought the good fight, I have finished the race, I have kept the faith. Henceforth there is laid up for me the crown of righteousness, which the Lord, the righteous judge, will award to me on that Day, and not only to me but also to all who have loved his appearing.

His master said to him, "Well done, good and faithful servant. You have been faithful over a little; I will set you over much. Enter into the joy of your master."

Robert's Memorial Service will be livestreamed at 2:00pm on Tuesday, January 18. To view the livestream, please follow this link: https://www.missionhills.org/streaming/
To order memorial trees or send flowers to the family in memory of Robert (Rob) Slavin, please visit our flower store.