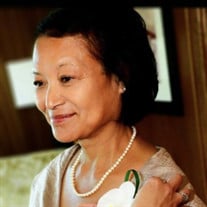 A loving mother and grandmother, Rieko Kobayashi Green, 76, of Highlands Ranch, Colorado, passed away on October 19, 2022, after a five-year battle with gallbladder cancer.

After marrying Barrett A. Green and having her first daughter, Sanae, they moved to Washington, D.C. and then to San Diego, California, where her twin daughters, Carrie and Nicole, were born. After a couple of years in San Diego, the family moved to Athens, Greece, for a few years and then to Coronado, California. Fortunately, the Green family was stationed in Yokosuka, Japan, for eight years, which allowed Rieko to spend time with her brother, sister, nephews, and extended family in Osaka and Kyushu. When it was time to leave Japan once again, they moved to Chula Vista, California, until December 2007. At that time, Rieko started her new life in Highlands Ranch, Colorado, with her three daughters and their families.

Rieko’s grandchildren, and attending all their many activities, was what made her heart full. Band concerts; swim, track, and gymnastics meets; karate tournaments; cheer competitions; baseball, softball, volleyball, soccer, basketball, football, and lacrosse games kept her busy as she showed up for Jadyn, Grace, and Caleb, cheering them on. An integral part of their lives as she moved to help raise them, her grandchildren carry the very best of her in them.

Rieko’s daughters were the beneficiaries of her sacrifices and love. Sanae, Carrie, and Nicole will continue to honor their mother through family gatherings and holding onto their close “Green Girl” bond. They are devastated by their mother’s passing; however, after caring for her during her fight with cancer and kidney failure, they are comforted that she is no longer suffering and is at peace.

Rieko was beloved by the many people who knew her. Many appreciated and enjoyed her love of cooking delicious food with which she filled her home. She loved working in her ever-thriving garden, which she did diligently and with such care. She would be in awe of the many flowers that are filling her home right now. Rieko also adored her grandpuppies: Bailey, Rudy, Chewie, Leia, Isa, and Maisy. They were never far from her as she would sneak good people-food to them occasionally.

Rieko will be greatly missed, and to fill the hole in her family’s hearts that her passing has left, we will continue to remember her and carry on a legacy she would be proud of.

In honoring her wishes, there will not be any services.
To order memorial trees or send flowers to the family in memory of Rieko Green, please visit our flower store.