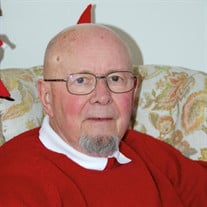 Richard Stout Tobin passed away on Wednesday September 28, 2022, in Littleton, Colorado. He was born on June 16, 1933, in Plainfield, New Jersey. At Somerville High School he met the love of his life Katherine Strader. They were married on July 2, 1955, and very much in love the rest of their lives. She was the center of his world for 67 years. They enjoyed camping and cruises as well as opportunities to travel.

He served in both the Navy and the Air Force and retired from military service in 1972. Richard was a Vietnam Veteran and very proud of his service to his country. He worked for several commuter airlines and had a passion for aviation. He had a second career with Martin Marietta where he worked several programs associated with aviation and the space shuttle as a Logistics Engineer.

Richard was the son of Richard and Eleanor (Doyle) Tobin. He was preceded in death by his parents, his sister Eleanor Kugler and his brother John Tobin.

Richard will be buried at Fort Logan National Cemetery in Denver, Colorado.
To order memorial trees or send flowers to the family in memory of Richard Stout Tobin, please visit our flower store.