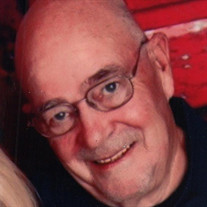 Richard Allen Leensvaart (Dick) passed away at his home in Castle Rock, CO on May 30, 2016 at the age of 74 from complications of cancer. He was born on April 18, 1942 to Jacob and Elizabeth June (Afman) Leensvaart in Denver, CO. He grew up in the Dutch Christian Reformed community of South Denver and attended and graduated from Denver Christian Schools. He was the oldest of six children, followed by five sisters: Linda, Nancy, Marcia, and twins Jean and Joan, all of whom live in the Denver metropolitan area except for Joan who lives in Michigan. A highlight of his youth was being a part of the Denver Junior Police Band in which he played the trombone. The band was invited and played in Washington DC for both Eisenhower inaugurations. He graduated from Calvin College in Grand Rapids, Michigan with a political science degree.

Dick married Shirley Rienstra on June 23, 1966 in Modesto, California and was looking forward to a 50th anniversary in a few weeks. They were blessed with twins, Ryan and Renee in 1976 and later a son Rick in 1980. They lived for short times in Michigan, New Jersey, and Albuquerque, but mostly in the Denver area. Dick spent his career as an adjuster in insurance casualty claims. Upon retirement he started church volunteer work and God led him to Christ's Body, a day ministry to the homeless in Denver. He later became assistant to the director, serving where needed and hauling food. Those were the most rewarding years of his life.

Dick was an avid race car fan. He loved Colorado and spending time in the mountains, as well as travel around the country. He enjoyed country, Christian, and gospel music. He also enjoyed reading Louis L'Amour books and owned over 100 of them. He truly loved spending time with his children and grandchildren.

Dick was preceded in death by his parents Jake and Betty Leensvaart. He leaves behind his wife Shirley, children Ryan, Renee, and Rick, and was "Papa" to five delightful grandchildren: Peter, Jack, Nora, Quinn, and Oliver, who were the highlights of his last years. He also leaves his stepmother Maxine Leensvaart, sisters Linda (John) Geels, Nancy (Bob) Bierling, Marcia (Jeff) Mains, Jean (Bob) Fielding, and Joan (John) Pettinga, uncles, an aunt, nieces and nephews. He will be missed here on earth, but Dick loved the Lord and is now with Jesus, walking streets of gold.

In lieu of flowers, contributions can be made to Christ's Body Ministries, 850 Lincoln Street, Denver, CO 80203 or William Harness Sacred Concerts, P.O. Box 328, Washougal, WA 98671.
To order memorial trees or send flowers to the family in memory of Richard A. Leensvaart, please visit our flower store.