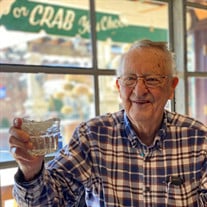 Born to Sara Garbrick on January 13, 1932 , Richard Clyde Garbrick grew up in rural Centre County, PA. Raised in a family of musicians and scholars, Dick’s true passion was for travel and adventure, and he was always proud of the fact that he soloed in a small plane at the age of 11. In his characteristically independent and determined way - he chose the Air Force at the age of 17. Based in Alaska as a mechanic, he transitioned to being a pilot - setting off his lifelong enjoyment of flight.

He served in the Air Force for 31 years, flying a C-124 in the Berlin Airlift, and flying missions in Korea and Vietnam. He regaled his childrens’ elementary school classes with his stories and slides from his mission in Antarctica capturing Emperor Penguins for zoos. One of his proudest moments was commissioning his granddaughter, Brianne, as a 2nd Lieutenant and pilot in the Air Force. She followed in her grandpa’s footsteps flying the Globemaster 3.

In 1952 he was set up on a blind date with Norma Jean Holzfaster. They had a somewhat disastrous first date, as he had driven himself and his buddy from their base in OK to Denver to meet her and was so tired he slept through the Dean Martin and Jerry Lewis movie at the drive-in.
He somehow convinced Norma Jean to see him again - and four dates later they were engaged.

After two years in Japan, Dick returned to the states in 1955 to marry Norma Jean. After serving in Greenville, S.C, he and Norma and their two young daughters, Anne and Kae, settled into a small farming community in Paxton, NE. Several years later, they relocated to Colorado where he began his career as a pilot with United Air Lines. Their family grew with the birth of his son David, and Dick’s love of travel took his family many places.

Another particular passion of his was food. On layovers, Dick knew which airports had the best ice cream, hamburgers, or fudge - and he particularly loved being in cities with great seafood. He flew for United for 25 years.
He loved sports and watched many Bronco, Rockies, and Avalanche games - cheering his teams and frequently disagreeing with the refs.

In 2015 Dick and Norma decided to leave their property of 45 years in Franktown, CO and move into the Windcrest community. Norma lost her battle with Parkinson in 2019, and just months later, Dick was diagnosed with esophageal cancer. He surprised his doctors by continuing his active life for several years, but no one who knew him well was surprised with his determined strength to continue living his best life.
He enjoyed his family, his friends, and his love of food (especially onions!) until cancer finally overtook him. His mind and spirit were still strong even in his last hours with us.
People who knew him can often recall a funny story about Dick’s independent spirit and his determination to live life HIS way, and he will never be forgotten by his family and many friends.

He is survived by his three children, Anne McMullen (Mark), Kae Wilmore (David) and David Garbrick (Donna); and by nine grandchildren and four great-grandchildren.
The family asks that in lieu of flowers a donation be made to Rocky Mountain Honor Flight in Westminster, CO
C/O Terry Garner - Treasurer
912 W. 139th Ct.
Westminster, CO 80023-9357
For an online donation visit :
rockymountainhonorflight.org
To order memorial trees or send flowers to the family in memory of Richard C. Garbrick, please visit our flower store.