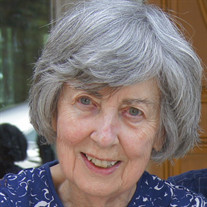 Norma Jean Holzfaster Garbrick was born August 19, 1932 to Frank and Clara Holzfaster of Paxton, Nebraska. She passed away peacefully in her home in Highlands Ranch, Colorado on March 20, 2019. She is survived by her husband of 64 years, Richard Garbrick. Norma had three children: Anne (Mark) McMullen, Kae (David) Wilmore, and David (Donna) Garbrick. She had nine grandchildren and three great-grandchildren. Norma is survived by her brother Ralph (Beverly) Holzfaster and her sister Geraldine Crook.

Norma lived her life with energetic-purpose and positivity. She loved getting up early in the morning and looking forward to a full, productive day. At her childhood farm home near Paxton, Nebraska, she loved riding horses, her classes at school, and her many friends and activities. She even got her pilot's license on the same day that she got her driver's license. Norma went to college at Loretto Heights in Denver, Colorado where she studied chemistry and biology, graduating with a degree in medical technology.

It was at Loretto Heights where she was set up on a blind date with her roommate's boyfriend's Air Force buddy -- Richard Garbrick. While she was less-than-impressed on their first date, she agreed to see him again, and five dates later, they were engaged. Following their 1955 wedding in Paxton, NE, they moved several times during Richard's Air Force career; living in Alabama and South Carolina before settling on their farm in Paxton, NE. Norma enjoyed working as a medical technologist at the clinic in Ogallala, NE.

In 1967, Richard was hired as a pilot with United Airlines in Denver, and Colorado became their home. Norma enjoyed a very active life, playing bridge, gardening, spending lots of time with her children and grandchildren, and having wine or coffee over good conversation with her friends. She and Richard had fun traveling and spent more than twenty of their wedding anniversaries on the Oregon coast she so loved. Norma's Catholic faith was very important in her life, giving her both hope and solace.

The last few years of her life became more challenging as she lived with Parkinson and eventually moved with Richard to a retirement community for added support. As Norma handled any challenge in her life, she fought the affects of this disease with determination, a strong positive attitude, and without complaint.

We will miss her love, her positive energy, humor, independence and her zeal for life, as she continues to inspire us.

In lieu of flowers, please donate to the Parkinson's Foundation at https://www.parkinson.org , Thank You
To order memorial trees or send flowers to the family in memory of Norma Jean Garbrick, please visit our flower store.