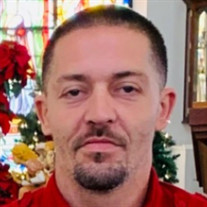 Michael Richard Kufrovich Navamuel, a mechanist and current Wheatridge, Colorado resident, passed away unexpectedly Saturday June 13, 2020 at the age of 37. He was surrounded by loved ones holding his hands.

Michael is survived by his parents, his sisters Jessica Margaret Borne (Jason), Elizabeth Crystal Quimby (Scott), Christina Michelle Girard (Joey), and Nicole Navamuel. His grandparents Rosa Del Carmen Serrano and Jose A. Serrano and many other aunts, uncles, cousins, nieces, and nephews whom loved him so dearly. Followed by his uncle Peter Perillo and grandparents Margaret Perillo and Phillip Perillo.

Michael was born in Fort Lauderdale, Florida on November 12, 1982 to Rigoberto Navamuel and Patricia Perillo. He attended school at South Broward Highschool and later went on to work at his Aunt Rosa Navamuels business where they installed and built kitchens for commercial companies all over. He also was able to learn the trade of Yatch Restoration and Refinishing. He had a love and passion for both of these jobs. He was an amazing worker and great asset to both companies.

Michael was a devoted family member. He would always put any family member or close friend before himself. He was always there. Dedicated brother and uncle. His nieces and nephews will never forget his love for each of them. In the end what mattered to him was that he made all of his family so proud. He moved to CO for a new opportunity to better his life and his future. He really enjoyed spending his last summer in Colorado with his sister, mother, and nephew showing off where he lived by taking them hiking, whitewater rafting, and being their tour guide through the beautiful outdoors of Colorado and the Rockies. He loved attending concerts at Redrocks Amphitheatre and traveling all over the last few years with a great group of men who stood by his side through the end. Micheal will be deeply missed by his family, friends, and all who were lucky enough to know him.

A funeral service is scheduled for 11:00 am on Saturday October 3, 2020 at Ascension of Our Lord, 1900 Greenwood Dr, Laplace, LA 70068.
To order memorial trees or send flowers to the family in memory of Michael Richard Kufrovich Navamuel, please visit our flower store.

Ascension of Our Lord Catholic Church