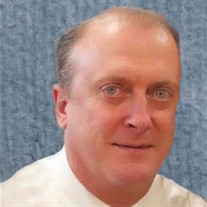 Story teller. Pianist. Author. Trickster. Rolling Stones fan.
For some, one of the best friends of their life.
Michael was the second son (he would say second to none) of Karl and Betty Friesen.
Growing up in Newton, Kansas he passed the halls while acing exams at Southbreeze Elementary, Chisholm Middle, and Newton High Schools. With more to learn, he earned an Associate Degree in Business from Brown Mackie College. After using it to gain a foothold in the corporate world, he then nourished his musical and creative writing while earning a Bachelor of Arts at Friends University.
He didn’t need the University to make friends, though, as he had many. They came to him naturally. Responding to the news that he was gone, one told that “Mike is the true friend we all hope we have in our lives.” Another, “I will always remember him as one of the smartest, wisest, funniest, most charismatic people I have met and probably will ever meet.”
Michael cruised through corporate positions effortlessly: Boeing, Koch, Sprint, more. He was a model for success: the title of one of his four books was “The Success Paradigm.” He gave an overview of it at the MIT Sloan Business School, one of his crowning achievements.
One of, because of course Michael’s best achievements in his life, his source of joy and pride, were his children: Brooke, Anna and Andrew. They lifted his spirit. When his grandchildren arrived: Mindzie, Scarlett and Raef, he just about floated away.
Thank you, Michael, for your tales tall and small, for your love of music, for your loyalty, for your pranks, for your love of life. Mostly, for your love. We will miss you dearly.
Michael is survived by Brooke and Brett Woodward, Scarlett and Raef. Anna Madsen, Mindzie. Andrew Michael. Brothers Gregory, Russell and Darrin. Sisters-in-law Genevieve, Andrea and Linda. Nephews and nieces Gabrielle, Galen, Noah, Hannah, Sam, Sophie, Grant, John, Elise, Gretchen. His loving mother, Betty. Finally, he is survived by his hope for the future, which is now for us to embrace and fulfill.
There will be a private scattering of ashes.
A Denver area Remembrance will be held at St. John’s Lutheran Church, 700 S Franklin Street, Denver, CO on Saturday, October 6 at 1 pm.
A Newton, KS area Remembrance will be held in September, 2019 to mark the anniversary of his departure. Details forthcoming.
RIP Michael Eric Friesen. See you soon.
To order memorial trees or send flowers to the family in memory of Michael Eric Friesen, please visit our flower store.