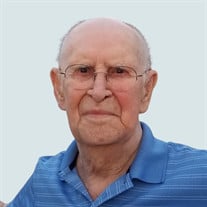 Melvin was born on February 23, 1932, in Woodward, Oklahoma. Mel was the sixth and youngest child of Elton Dallas and Juda Florence Gibson. He was blessed when on June 5, 1953, he married the love of his life, JoAnne Phillips, at her parents’ house in Sharon, Oklahoma. After they were married, he reported to Fort Leonard Wood Missouri and then served in Korea.

Mel and Jo started their life's journey together in California after he was discharged from the Army. He went to work for Garrett AiResearch for 38 years. After retiring they sold their home in Carson and moved to Enid, Oklahoma for eleven years before settling in Littleton Colorado. After moving to Oklahoma, he decided to start a second career as a substitute teacher for the Enid School District and continued teaching when they moved to Colorado.

Mel was raised in a Christian home and lived his life committed to the Lord. He is survived by his loving wife of 68 years, JoAnne Gibson, two sons and a daughter, Daniel and wife Patricia, Greg and wife Suzanne, and Lanena and husband Jim, 10 grandchildren and 9 great grandchildren and numerous nieces and nephews. He was preceded by the passing of his brothers E.D., Del Dean and sisters Verna Lee Keene, Wanda Keene and Naomi Stipp.
To order memorial trees or send flowers to the family in memory of Melvin L. Gibson, please visit our flower store.