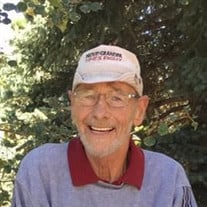 Born on March 22, 1947 in Rushville, Indiana, Jim moved to Denver with his eight siblings when he was 9 years old. As a teenager, Jim was known to travel around Northglenn and Thornton by horseback, including riding in and winning weekend rodeos. Throughout his life, Jim demonstrated his unconditional love for family - family first was not a saying but the way of life - be it through his annual family road trips cross-country (always a new place and a new adventure for his family of 6), his weekend dune buggy rides around town soaking in the sun and even at his business Clark's Cleaners where he and his family served Lowry Air Force Base military leaders including the Vice President of the United States of America.

All very important to Jim and those around him, but it was the next chapter in his life that brought the most joy to him...and it all centered around his family. Jim was the proud captain of his boat, the MARADLYNNJ, a tribute to his children, truly his pride & joy, and the centerpiece for family fun at Jackson Lake which was his special destination where he and the family frequented on summer weekends. When not on the water or not in season, the Best Grandpa Ever could be found at a field, court, rink, school event, BBQ or holiday gathering cheering on or playing with his 8 grandkids.

Everyone that knew him, whether known as Marvin, Jim, Jimmy John, Hot Shot, Grandpa from the Boat, Grandpa or simply Dad, knew he always lived life to the fullest and always enjoyed meeting new people.

Services will be held Friday 27th, 2017 at 1:00 PM at Hyland Church, 9185 Utica Street, Westminster, CO 80031. A celebration of life will follow the service at the Skene residence, 1443 Dunsford Way, Broomfield, CO 80020.
To order memorial trees or send flowers to the family in memory of Marvin "Jim" Clark, please visit our flower store.