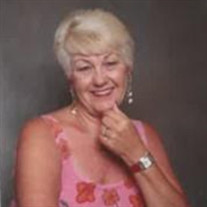 Marlene Tolliese Blakkolb of McKinney passed away on Friday, March 12, 2021 at her home in Castle Rock, Colorado.

Mrs. Blakkolb was born in 1937 in Ohio and grew-up in Yucaipa, California. She has been married to Bary Blakkolb since June, 1961. She has lived in Texas since 1983 moving to Plano with her husband and children from Southern California via the Chicago area. Shortly thereafter the family moved to McKinney where she and her husband became avid golfers for many years. She was a loving wife, mother and grandmother. She was very family oriented and seized every opportunity to be with her twin granddaughters. She enjoyed and loved her family very much. Her life was filled with fond memories of the happy times she spent with her family throughout the years. She and Bary were blessed with numerous vacation trips to Hawaii, their favorite getaway location; and, to Disney World. They also did extensive traveling throughout the Southern, Central and Western parts of the country; many times, playing numerous golf courses along the way.

Survivors include her husband, Bary; a son, Brent and his wife Lori of Highlands Ranch, Colorado; a daughter, Paula and her husband Steve Meadows of Pflugerville, Texas; two twin granddaughters, Kayla and Hannah Meadows; brothers, Roland and his wife Norma, of Hilton Head, Lester and Jerry Henderson of Washington state, and sister, Marie Shupe and her husband Richard of New Albany, Ohio.

Mrs. Blakkolb was one of the initial members of Stonebridge United Methodist Church in McKinney during its' start-up back in 1995. She has served SUMC over the years performing many tasks and functions.
To order memorial trees or send flowers to the family in memory of Marlene Tolliese Blakkolb, please visit our flower store.