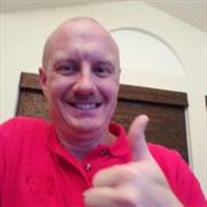 Mark Warner Wyss was born Denver, Colorado to parents, Edith Yockey and James Wyss on November 23, 1966. Mark was raised in Englewood and found his skills well matched in the field of computer science. Mark married Debbie Kuhlmann July 23, 1994. Alyssa, their daughter is 13 years old and has been the light of their lives. Mark’s carrier advancements were steady as he advanced his certifications to become a Network Architect for QEP Resources Inc. Mark's hobbies included woodworking, remodeling, technical support for sound systems and constant research and podcasts of new technologies. Mark’s work travels brought him to The Philippines, Australia, France and around the United States. Mark brought humor to life both at home and at work.

Mark is survived by his wife Debbie and daughter Alyssa; along with his father James Wyss and step-mother Phyllis Wyss, brothers, Jay (Lisa) and Shawn. Nieces and Nephew, Zoe, Amanda, Kaitlin and Brooks.

Memorial Services will be held at 11:00 AM - Monday, February 27, 2017 at The Dixon Chapel at Cherry Hills. Family will receive friends from 10:00 AM until service time that day at the chapel. A reception will follow in the Orchard Room.
Memorials are suggested to: American Foundation for Suicide Prevention- Colorado Chapter
8200 S. Quebec Street
Centennial, CO 80112
or to

http://afsp.donordrive.com/index.cfm?fuseaction=donorDrive.personalCampaign&participantID=1224584
To order memorial trees or send flowers to the family in memory of Mark W. Wyss, please visit our flower store.