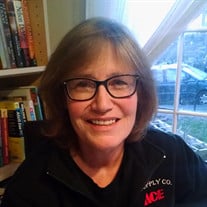 Marita Kay Sanchez was an intelligent, kind, sarcastic soul. She left us too soon on October 31st, 2022 after a long battle with cancer. Marita was born in Great Falls, Montana on September 9th, 1955 to Patricia Joanne Shelley and Donald Joe Shelley. She grew up with her siblings Henry Shelley, Michael Shelley, and Lisa Woitalewicz in Denver, CO. She moved to Bremerton, WA in 1976 with her new husband James Sanchez. She is survived by three children Joseph (Tammy) Sanchez, Kathryn (Adam) Burnett, Alexandra (Joseph) Thiel, and three grandchildren Trevor, Parker, and Charlie. She was preceded in death by her parents, Patricia and Donald.

Marita divorced James and remarried in 2003 to Robin Mason, whom she is also survived by.

Marita earned her BA in Library Science from the University of Washington and later an associate degree in Accounting from Olympic College. She had a number of hobbies including knitting, sewing, gardening, cooking, and traveling. Marita excelled in all endeavors she chose to spend time on. She had many long-lasting friendships that she maintained throughout her life. She will be forever missed.
To order memorial trees or send flowers to the family in memory of Marita Kay Sanchez, please visit our flower store.