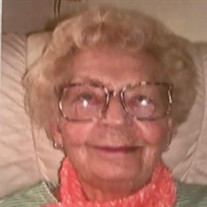 An only child , she lost her parents at a young age and became very patriotic and wanted to do something for our country. She became a member of the first ever women’s Marine division in World War II in 1943. She received Boot Camp training at Hunter College in New York and Motor Transport School at New River , North Carolina.
.
She drove everything from Jeeps to “6” Wheelers on convoys and around the base. On a beach in North Carolina she met her future husband Larry , ( my Dad ) they were married in California in 1945.

Moved initially to Seattle in 1951 where she raised Lori and me . Later moved to Denver, CO in 1988 where Lori lived.

She loved traveling and has been to many places in the world. She kept her self busy volunteering. She has four grandchildren and five great-grandchildren. She will be missed.

S
To order memorial trees or send flowers to the family in memory of Marie J. Rugg, please visit our flower store.

The Gardens of Columbine Assisted Living