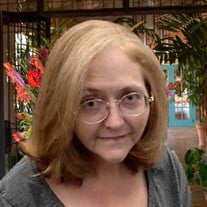 Marcie Jean Anderson-Stanley was born in Denver, Colorado on October 20, 1970.

Marcie attended St. Louis King of France Elementary School in Englewood, Colorado and graduated from Arapahoe High School in Centennial, Colorado. She was awarded a full ride scholarship to Berkley College of Music in Boston, Massachusetts and attended for 2 years. Marcie earned a degree in psychology from Western State College in Gunnison, Colorado on May 4th’ 2004.

At an early age Marcie was a talented singer and song writer. She has sung at many events. She sang at Harrah’s Resort in Lake Tahoe and at the Century Club in Tokyo, Japan just to name a few.

Marcie loved her family and loved cooking for them. She will be greatly missed by all who knew her. She leaves a legacy of beautiful music.

After a long illness, Marcie passed to her heavenly Father on June 25th, 2021
To order memorial trees or send flowers to the family in memory of Marcie Jean Anderson-Stanley, please visit our flower store.