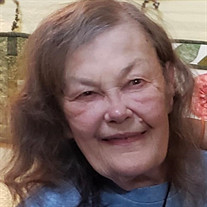 She started life on 310 N.E. 6th St. in Abilene Ks. Before moving to Curtis Ne. and then to Aurora, Co. A little known bit of Curtis history, is that she and her friends were the perpetrators of the infamous “mum bowl” incident.

She graduated H.S. from Aurora Central and received her teaching degree in music from C.U. Boulder. It wasn’t until after she was hired that she found out that she would never teach higher than elementary school. That just didn’t sit well with her, so she moved on to something new.

She married the man who not only was an unintended blind date, but also the only person that she had ever known who read for fun, James Alton Bewley, 10 years her senior on 6/17/1961 in Aurora, Colorado

Her 3 children Daren, Damon and Devin were given these names because Jim didn’t want names that could rhyme with the last name. She often said that if there had been another boy, she was out of names.

In her life she wore many hats, teacher, jeweler, manufactures rep, store owner, Reverend, landlord and even a clown. Anything that sounded like a good idea, and fun, she was willing to give a try. She was instrumental in bringing the balloon industry to Colorado and became the first balloon decorator in the state as well.

She loved planting and growing flowers, as well as ideas in others. Rescuing pets was a real joy for her, but her biggest joy was quilting. She also loved making clothing for her grandchildren and always looked forward to seeing them in those cute little outfits.

She is survived by her 3 children, Daren, Damon and Devin and 3 grandchildren Danielle, James and Cheyenne.

Memorials are suggested to Aurora Warms The Night - please.
To order memorial trees or send flowers to the family in memory of Lynda K. Bewley, please visit our flower store.