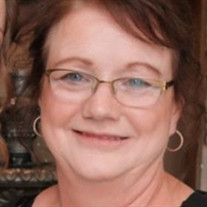 Laurie Pfannenstiel died at age 61, passed away peacefully on Tuesday,October 5th, 2021, at home with her family in Colorado. She was born January 11th 1960, in Denver, to Charles and Alice (Aumiller) Stillwell. Laurie had a degree in Criminal Justice and had her certification as a CNA. She married Steven Pfannenstiel in December of 1979 in Kansas, where they met. Both were attending college at the time. Steve met Laurie while DJing for a beauty pageant where Laurie was one of the pageant girls. Having a true passion for life, Laurie was always working hard while enjoying the small things. She was clothed in strength and dignity. She enjoyed helping people and spending time with her children and grandchildren. Especially when she had chocolate to share! She touched the heart of every person who met her. She was our true Angel on earth.

Laurie was preceded in death by her husband, Steve. Laurie is survived by her father, Charles; her brother, Charles; her sisters, Crystal and Irene; her children, Blake and Katrina; and her grandchildren. Being the kind, compassionate, loving woman she was, Laurie would want her family and friends to celebrate her for the happiness she brought to each of our lives. Please feel free to reach out to Laurie's family to share in laughs, memories, and reminiscing of Laurie's life.

We will love you eternally, Mom.
To order memorial trees or send flowers to the family in memory of Laurie A. Pfannen, please visit our flower store.