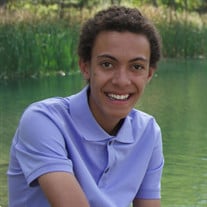 Laun Antonio Spriggs, age 23, passed away peacefully on Tuesday, July 27, 2021. He was born March 25,1998 in Silver Spring, MD to Kevin Spriggs and Luisa Bonilla-Spriggs. Laun was a 2016 graduate of Thunder Ridge High School. He worked at Northridge Elementary School Day Care for over 6 years and had a tremendous impact on the school community. The Northridge greater community of kids, teachers, parents, and families described him as sweet, compassionate, kind, funny, bubbly and intelligent. The kids nicknamed him Launie Banana and absolutely adored him.

Laun had a true competitive spirit and passion for soccer, and shared a close bond with his teammates. He was a competitive athlete, who played in multiple State Championships in soccer and tennis. In his final year playing soccer, his team competed among the very best in US Youth Soccer’s Far West Regionals.

His love for soccer and kids led him into coaching youth, where in 2018 he was named one of Colorado Soccer Association’s Boy’s Coaches of the Year. He continued his coaching career with Real Colorado and was actively moving up the coaching ranks. Coaching and growing his players talent was Laun’s #1 passion.

Laun had strong principles that led him to be a leader and mentor to many. He was a man of action with very strong values and acted on his beliefs. He was perpetually pursuing ways to help and serve others, especially youth. Laun greatly cared about people and conceived and organized two successful fundraisers: 1) Hats for Haiti, a fundraising program where kids could wear a hat to elementary school if they donated a dollar. Laun helped raise over $1,000 donated to Haiti Hurricane Relief, and 2) Sports Equipment for Cuba, where Laun collected hundreds of pieces of sports equipment to be donated to Cuban youth. He personally handed out the equipment to kids whose faces beamed with joy and appreciation. Laun was preceded in death this year by his dog, Rocky. He is survived by his parents, Kevin and Luisa, his dog Shadow, grandparents, aunts and uncles, and cousins.

Being the kind, compassionate person he was, in lieu of flowers, please smile at a stranger or brighten someone’s day whenever you can — the world needs so much more love. If you are interested in making a donation in Laun’s name, please consider a donation to Soccer Without Borders in his memory www.soccerwithoutborders.org/colorado . Please include Laun's name in the donation memo.

Laun’s family will be hosting a Celebration of Life Service at the Amphitheater at Highland Heritage Regional Park in Highlands Ranch, Colorado (9651 S. Quebec St. Highlands Ranch, CO 80130) on Tuesday, August 24 at 10:00 am. You will have an opportunity to share a favorite memory or a story about Laun, if desired. The Celebration will occur outside rain or shine. Please feel free to dress casually and colorfully. Bring a blanket, and in case of rain, an umbrella.

If you would like to view Laun's memorial video, please follow the link below:
https://www.tributeslides.com/tributes/show/MQN3YYSNF6J67BGF
To order memorial trees or send flowers to the family in memory of Laun Spriggs, please visit our flower store.