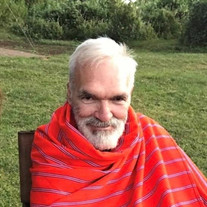 Larry Joseph Krussel, most recently of Castle Rock, Colorado, passed away peacefully at age 71 on Thursday, July 7, 2022. He was born to William and Catherine (Hoog) Krussel on December 25, 1950, in St Louis, Missouri. Larry spent his childhood in St Louis and was the second youngest of 7 children. After graduating from St Louis University High School, he studied at Massachusetts Institute of Technology. He met his wife Betsy Barr while studying there and they married in the summer of 1973. Once he obtained his master’s degree at MIT, he served as a pilot for the United States Air Force. After many adventures and assignments around the United States, he retired from the military in 1997 while living in Yorktown, Virginia. Afterwards, he continued working for a few more years, until finally retiring for good. After Betsy passed in 2010, Larry met and married his second wife, Terri Riley-Mares. They divorced in 2014 but remained friends until his passing.

When Larry wasn’t working or studying, he could be found traveling, camping, hiking, teaching his children everything he could, and spending quality time with his family. He became quite the photographer in his later years and could often be found at various parks, beaches, and waterways photographing local wildlife and ships passing by. He also had some wonderful opportunities to photograph wildlife in both Alaska and Africa during some of his travels. He and Betsy were active in their church in Virginia and developed strong friendships there.

Larry will be remembered with fondness and love by his children Jamie and Michael, his siblings Elmer (Marcia), Joe (Nalinee), Hank, Anna Marie, and John, numerous nieces and nephews, his ex-wife Terri, and many of his wonderful friends from college, the military, and church. Larry was preceded in death by his parents, his sister Mary Kay, his wife Betsy, his son Steven, his parents-in-law Richard and Peggy (Brower) Barr, his brother-in-law Bill Barr, his close friend Ron Clark, and his beloved dog Sir Walter of Threechopt Road (aka Wally).

A viewing and eulogy will be held at Heflebower Funeral and Cremation Services on Thursday, July 14 from 4-6 pm. A rosary (9:30am) and burial mass (10:00am) will be held at St Francis of Assisi Catholic Church in Castle Rock, CO. Burial will immediately follow at Cedar Hill Cemetery in Castle Rock, CO. Please join us in celebrating the life of a beloved son, brother, father, uncle, and friend.
Memorials can be sent to the funeral home, or consider donating to The Parkinson’s Foundation, the Michael J Fox Foundation, or a veteran’s charity of your choice.
To order memorial trees or send flowers to the family in memory of Larry J. Krussel, please visit our flower store.