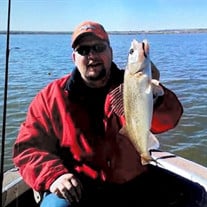 Kevin Eugene Lewis, age 44, passed away unexpectedly on Wednesday, September 7th, 2022. Kevin was born in Amarillo, Texas on December 24th, 1977, to Gail and Larry. At 15-years-old, Kevin moved with Gail to Denver, Colorado and attended Englewood Highschool. Not long after moving to Colorado, Kevin met the love of his life Lisa. After dating for several years, Lisa and Kevin were married on July 4th, 2001.

Through the years Kevin spent much of his time hunting, fishing, finding his career, and building a family with Lisa. In 2003, Kevin became a father for the first time to Brett Riley, followed by Cody Ryland in 2005, and his baby girl Dakota Rae in 2013. Kevin made sure to pass along his love for the outdoors to his family, spending many vacations in the mountains or at the lake. Not only was his love of the outdoors passed down to his children, but so was his passion to always help others. Any family member, friend, and even strangers know that Kevin was a man that could be counted on in any time of need. Lisa has received countless messages telling her of ways that Kevin has helped people that she was not even aware of.

Early in adulthood Kevin held several law enforcement positions, including bounty hunting, which led him to his career of being a Federal Corrections Officer. Kevin just celebrated his 20-year anniversary at Englewood Federal Correctional Institution, where he made life-long friends that became family.

Kevin is survived by his wife Lisa Lewis, his children Brett, Cody, and Dakota, his mother Gail (Bill) Kleespies, and his father Larry (Cindy) Lewis. He is also survived by numerous aunts, uncles, cousins, nieces, nephews, and friends.

In lieu of flowers, the family requests that you consider donating to your local homeless shelter or wildlife organizations.
To order memorial trees or send flowers to the family in memory of Kevin Eugene Lewis, please visit our flower store.