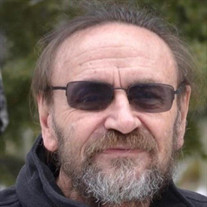 Kenneth Roy Brown was born November 6, 1946 and passed from our world, peacefully into the early morning hours, on May 7, 2020. Ken was born to Roy and Murrial Brown and is survived by his sister Sharon Purcell. Ken married Tita Quezada on June 15, 1978 and they remained married for almost 43 years. Ken had a son Darren Brown and 2 stepchildren, Sandra Herrera and Santos Herrera. Ken was a grandfather to Kaitlyn Vaughn, Justin Moore, Randy Trotter, Madelin, Olivia, Sophia and Finn Herrera, also great-granddaughter Isabella Vaughn. Once Ken married Tita he became a part of a very large and fun-loving family with many sisters, brothers, nieces and nephews and enjoyed countless celebrations with them.

From 1964-1967 Ken served with the US Navy and had two tours in Viet Nam. In 1967 he was honorably discharged and served in the Naval Reserve thru 1970. Ken retired from Montview Presbyterian Church in 2016 where he served as a sextant. Ken and Tita first met in 1970 and met again in 1976 when Tita was a single mother with two young children. Ken worked hard at winning Tita’s heart. He owned a food truck and gave Tita the job of running it so she could provide for her small family and in 1978 they became a family of four.

Ken loved car racing, riding his Harley Davidson, working on his cars, traveling to Kentucky to visit with his granddaughter and great granddaughter and especially enjoyed eating Tita’s home cooked meals…especially green chili, chicken enchiladas, smothered burritos and chocolate cake with real whipped cream. Ken’s favorite holiday was Thanksgiving as he loved the turkey dinner with mashed potatoes and gravy and at Christmas, he loved her chocolate Christmas cookies…he ate 8 dozen of them himself this past Christmas and would share them with no one. How did Ken get so lucky to spend his life with this amazing cook? The last big meal he ate before he passed was turkey with mashed potatoes and gravy. It was the last meal he requested from her.

Ken suffered with macular degeneration and then Parkinson’s Disease late in life. Even as his eyesight failed him, he still had a zest for life, enjoying family parties and celebrations, spending time with friends and he never stopped enjoying Tita’s meals.

Ken will be buried in his favorite t-shirt. It says “Hi, I’m Ken and I’m a lesbian.” He kept his sense of humor always.
To order memorial trees or send flowers to the family in memory of Kenneth R. Brown, please visit our flower store.