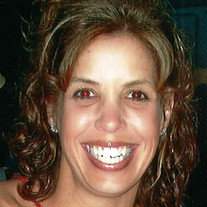 Kelly Graham-Snyder, 50 of Colorado Springs, passed away May 27th at her home after a long battle with cancer.

Kelly was born February 13, 1966 in Lincoln, Nebraska to James and Bonnie (Krause) Graham. Kelly was baptized and confirmed in the Methodist Church. She graduated from Hastings College in Hastings, Nebraska in 1988. Kelly married Gregory Snyder on March 14, 1992. Their son Gabriel was born July 12, 1995.

She was preceded in death by her husband Greg and her father James.

Memorials are suggested to the Black Forest Animal Sanctuary; www.bfasfarm.org or the American Cancer Society.

“Forever our inspiration, we love you, go with God!”
To order memorial trees or send flowers to the family in memory of Kelly Graham-Snyder, please visit our flower store.