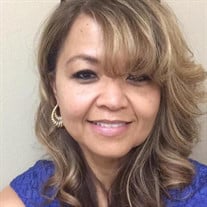 Our beautiful and beloved Julie Holley, 54, of Castle Rock, CO, was called to Heaven on February 3, 2022, after a courageous battle with cancer.

Initially, Julie pursued a degree in dental assisting, but her interests would eventually lead her to careers in retail sales, private insurance, and many years as an eagle-eyed invoice reviewer. She was generous with her time and talent, often lending her acute attention to detail, as needed, to family members during tax season.

In 1986, she met and married the love of her life, Steven R Holley at Clark Air Base. After relocating to the US, she tested the waters of motherhood as a devoted dog mom to Hauli—her cherished toy poodle of many years. It was evident from early on that Julie would make a great mother. She always had a way with children. She acknowledged and effortlessly engaged with the children around her, making them feel seen and loved. It was no surprise that Julie and Steve would become parents to two children, Edwin Jerome “EJ” Holley, age 23, and Isaiah Douglas Holley, age 14. Though known for her characteristically sweet and delicate voice, she was inarguably the loudest cheerleader at her sons’ basketball games. She was their biggest fan.

Julie loved to travel and lived in many places over the years including the Philippines, Massachusetts, Maryland, California, Oklahoma, and Colorado. She enjoyed collecting antiques, crafting, and conversing with others. She was friendly and loved to share things that brought her joy. Her distinctive laugh was like music to anyone within earshot.

Julie was tirelessly dedicated to her family and friends. She made a point to always be there for her loved ones and would do everything she could for them.