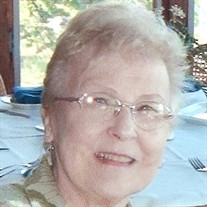 away on Tuesday, August 4, 2015 at her home. She was born in Calumet, Michigan on

1947 where she graduated from High School in 1951. After graduation she worked at

Territory of Alaska while Ken was serving in the U.S. Air Force during the Korean

Conflict. Joyce was employed as a government secretary at Elmendorf Air Force Base.

Joyce and Ken also lived in several other areas of the country, including Maine, West

Virginia, Iowa, Minnesota, and in Walpole, Mass. for 23 years. Joyce was an active

charter member of the Walpole H.S. Friends of Music while her children were in school

and an active member of the Epiphany Episcopal Church in Walpole. For several years

Joyce was a Library Clerk at the Walpole Public Library.

In 1993, Joyce and Ken moved to Colorado where she became very active in family

history research. As family genealogists-historians Joyce and Ken traveled throughout

the U.S. They published a series of Family History books and organized family

reunions in the Copper Country and Ishpeming locations.. She was a member of

Canada and her Family Tree data base includes over 125,000 names. Her heart was

farm was a high priority.

Besides her parents, Joyce was preceded in death by her brother Arthur Nester

Creek, WI., and many nieces, nephews, cousins and friends.

Burial will be in the Lake View Cemetery in Calumet.
To order memorial trees or send flowers to the family in memory of Joyce J. Gardner, please visit our flower store.