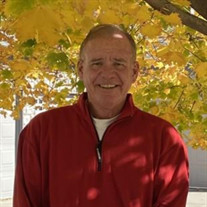 John Wilkinson, age 59, passed away on Thursday, Feb 3, 2022 in Parker, Colorado. He was born on November 8, 1962 in New York City to John and Mary Wilkinson. He went to high school in White Plains New York where he played football and graduated in 1988 from the University of Northern Colorado where he majored in business. He married Diane Schulze in 1991 in Westminster Colorado at The Ranch Country Club and they had three sons. He worked for Campbell Sales company for 18 years and more recently Milo’s Tea Company. He loved the people he worked with and spoke very highly of his team.

John had a zest for life and a passion for the outdoors whether it was fishing, camping, hiking, dirt bike riding, or just gazing at the mountains. He had a passion for his work and liked to gather us to do taste testing on the many products he has represented in his career. He was an avid sports fan and participated in ice hockey leagues and coached youth lacrosse. John loved animals, photography, history and traveling with his family to new destinations. Above all else, he loved his three sons and was actively involved assisting in their many sporting events and school activities and of late watching them grow into young adults and supporting them in any way he could.

John was preceded in death by his parents, Mary and John Wilkinson, and his beloved dogs Bear and Skye. He is survived by his sons, Graham, Tanner and Jared Wilkinson, sisters Sandy Kerrigan and Susanne Wilkerson, nieces Ashley Lenihan and Haley O’Donnell, and nephews Michael and Brian Kerrigan and Logan and Mitchell Wilkerson. John’s family will be holding a Celebration of Life gathering at Hacienda Colorado immediately following the service from 2:30 to 4:30 pm to share in laughs, memories and reminiscing. Address is 10500 Bierstadt Way, Englewood, CO 80112.
To order memorial trees or send flowers to the family in memory of John G. Wilkinson, please visit our flower store.