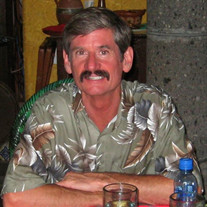 John Walter Kuenning was never a stranger to anyone for long. His smooth, friendly nature endeared him to all he met along the way. He loved sharing stories but even more, he loved to hear everyone else’s story. On February 20, 2022, John passed away from COVID-19 after a courageous and valiant battle.

Born in 1955, he joined his adoptive forever family in 1957 in Colorado Springs, Colorado. He was raised by two loving parents, Walter and Ruth Kuenning, and three older, adopted brothers Richard, James, and William, in a lively, adventurous, outdoorsy family. Thanks to an AncestryDNA search, John connected with his biological brother, J.R. Phillips, in 2016. Their close relationship became an important part of John’s later years.

John initially attended Colorado State University to pursue a career as a veterinarian. However, his career path took a turn when, at the age of 21, John chose to apply to the Police Academy. He spent several years working as a police officer in northern Colorado, first in Greeley and then Fort Collins, and graduated from the FBI and Air Force SWAT Team and Hostage Negotiation school. It was while taking a suspect to the ER that John and Karen first met. She worked there while attending CSU. After moving to Denver, John joined the Denver Police Department.

John became the first EMT among his law enforcement colleagues, and later became a Paramedic. He championed the idea that police officers should have access to EMT training to be able to save lives at the scene. While giving a presentation on this across the country, he was recruited by Children’s Hospital to be their Director of Critical Care Emergency Transport. He developed their seven-state neonatal emergency transport system and raised funds for their first Learjet, enabling preemies, babies, and children to be emergently transported for lifesaving care.

John received his Master’s Degree in Health Care Systems from The University of Denver. Shortly after this, he became the Chief Operating Officer at The Rocky Mountain M.S. Center. John later became a healthcare consultant and was brought in as interim CEO to do major turnarounds for large hospitals and health center networks in Texas, Washington, Louisiana, and Oregon. The weekly travel was challenging but no matter what, he was home in time on Friday to take daughter Alyssa to her horseback riding lessons.

In 2003, John joined Metro Community Provider Network where he acted as Vice President of Finance and Operations until 2014. He would tell you that one of his greatest accomplishments at MCPN was creating a much-needed armed security team for these health centers. After leaving MCPN, John chose to return to a passion that had endured since he was a cop. He and daughter Alyssa co-founded United States Protective Services Agency to provide safety, protection, and training to many public and private organizations, the majority of which are houses of worship and private schools. John loved the opportunity to be onsite, interacting with as many people as possible. He was proud of his elite team of Agents and considered them friends more than employees. John was a certified NRA Instructor and American Red Cross First Aid/CPR/AED Instructor, and deeply loved teaching others to master the skills necessary to keep themselves and others safe.

Travel was a hobby central to Karen and John’s life together. John was an avid Scuba Diver and introduced Karen to the sport in the hot tub in 1986! They both achieved the levels of Divemaster and Master Diver and ensured that the next generation was given the opportunity as well. The memories began on their honeymoon to St. Thomas and continued to places such as

Cozumel, St. Martin, Cancun, Belize, Italy, Alaska, and two European river cruises - one to see the Christmas markets along the Danube and the other to enjoy springtime along the Rhine which ended with an amazing adventure seeing the Matterhorn in Switzerland. One of the most magical trips of all, and their last, was the RV trip to Colorado’s western slope the week after Christmas to see these quaint towns covered in snow and Christmas decorations. Travel answered their need for adventure and renewal.

John loved being a whiskey-loving Colorado boy, being in the mountains and in nature, and being around animals. He had many beloved dogs over the course of his life, and got great joy from watching the birds and hawks in his backyard and hand-feeding the many squirrels.

He was preceded in death by his parents, his in-laws, brother-in-law Donal Merkel, and nephew Derron Merkel.

A memorial service celebrating John’s life will take place on:

John’s wish was for any donations in his memory to be made to the kickstart Ophelia’s Haven, a 501(c)(3) animal welfare nonprofit founded by his daughter Alyssa.

Donations to Ophelia's Haven can be sent by Venmo to @opheliashaven or mailed to:
Ophelia's Haven
P.O. Box 1182
Castle Rock, CO 80104
To order memorial trees or send flowers to the family in memory of John Walter Kuenning, please visit our flower store.