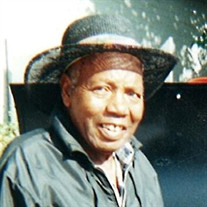 Funeral Services will be held at 11:00 AM Thursday, April 21 at Heritage Christian Center in Aurora with the Rev. Greg McDonald officiating.
Visitation will begin at 10:00 AM the day of the services at the Church.
A repast will follow the services.
A Well Lived Life
His business attire showed he was a hard worker and self motivated. His laugh was easy and he considered God as his most stalwart business partner and said his legacy is the passing of his work ethic onto the younger generation.
Joe was born near Nashville, Arkansas on July 18, 1927. In 1943 his older brother asked him to go to Colorado where he stopped in LaJunta, Colorado. He went to LaJunta to be able to make more money to help his mother back in Arkansas. Once in LaJunta, he never returned to Arkansas.
Mr. Jordan's first job in LaJunta was at a barber shop which didn't last real long because he wanted to make more money to be his own boss, so he and his wife found and purchased a large run down home, re did it to be able to rent out the top two floors and the bottom he and his wife's living area.
Later he opened up a shoe shine parlor int he front living room and in the back of the house he had a detail shop for cars.
Joe lived in LaJunta until 1979 when he moved to Denver. In Denver he could not be still and had to be doing something with his hands and be his own boss. At that point he decided to make BBQ grills which grew into Jordan's Custom Made Grills and Smokers.
He did that until 2012 whe he decided to retire and shut down the business located at 2810 Welton Street in the Five Points area of Denver.
He was the last living child of 14. He went home on April 12, 2016. He will be greatly missed by many.