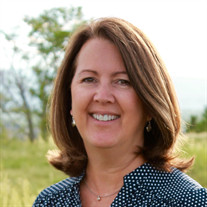 Jill M. (Fujan) Walters, 50, of Littleton, CO. passed away in the early morning hours of July 20, 2017 at Denver Health as a result of a tragic car accident the afternoon of June 30, 2017 that took the life of her husband that day.
Jill was inspiring, empathetic and spunky. She always had a light in her eye and a smile on her face.
Jill was born December 30, 1966 in Fremont, NE to Marvin D. and Lucile A. (Wotipka) Fujan. She grew up on a farm outside of North Bend, NE and graduated from North Bend Central High School in 1985. After graduating Jill attended the University of Nebraska Lincoln where she studied business and marketing.
Jill met her husband Mike Walters at UNL and they wed in September of 1989 following Jill’s graduation.
The pair had two beautiful children Nicole and Nicholas.
Jill worked for a start-up company, Koia, as a Vice President of sales and marketing in Los Angeles CA. Outside of work Jill spent time making memories with her family and friends. She especially enjoyed traveling the world, growing veggies in the garden, walking her two German shepherds, and watching Husker football.
Jill had a big heart, and truly loved and cared for anyone she met. She invested in others lives, which in turn made hers all the richer. Her infectious laugh, charming smile and fun living spirit will be missed by many.
Jill is survived by her daughter, Nicole and son, Nicholas, her mother, Lucile Fujan, sister, Joyce (Mike) Bowman, brothers; Michael (Debi) Fujan, Tom (Tera) Fujan and Randy (Tammy) Fujan. Aunts and uncles; Rose Protextor, Agnes Selfrige and Marianne & Harvey Callahan with numerous loving nieces, nephews and cousins.
She was preceded in death by her husband Michael, Father Marvin Fujan, maternal grandparents; Ludvig & Bessie (Benal) Wotipka, paternal grandparents; Frank & Emma (Stich) Fujan.

Visitation will be held 5-8 PM Thursday 7/27 at The Dixon Chapel at Cherry Hills.

In Lieu of flowers memorials are suggested in care of the family for a future designation.
To order memorial trees or send flowers to the family in memory of Jill M. Walters, please visit our flower store.