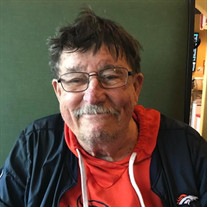 Jerome Allen Chadwick, that guy with the cigar, age 85, of Denver, Colorado died Saturday August 20, 2022 in Colorado. Jerome was born on March 15, 1937, in Hamilton, Ohio, the son of Mary Coyle Chadwick of Kentucky and W. Allen Chadwick of Chattanooga, Tennessee. Raised in Hamilton, Jerome won the contest for “Hamilton’s Cutest Baby” and spent his childhood days with younger brother Jay, favorite dog Brownie, and the family cow which he hated to milk.

Jerome grew up in Hamilton with aspirations to be a sports journalist and attended Harvard University, where he switched to Pre-Med, graduated in 1958 and then attended the University of Rochester Medical School, graduating in 1963.

Jerome married Harvard-Radcliffe girl Marcia Washburn Moltman in 1959. Together they lived in Rochester and then moved to Colorado for his Medical residency at the University of Colorado, where he studied Psychiatry. He spent the remainder of his life living in the Denver area. Jerome was a Psychiatrist ( “Not a Psychologist!” ) working in private practice for many years, specializing in Child and Adolescent Psychiatry and later working for the Colorado Department of Corrections treating adults.

Jerome loved sports and happened to attend the first ever Bronco game, at Harvard stadium. Upon moving to Denver, he became a huge Bronco fan and season ticket holder. He attended countless sporting events and had been a season ticket holder for the Broncos, Buffs, Rockies, Rocky Hockey, Avalanche, Nuggets, Rapids, Denver Bears, Denver Gold, Colorado Foxes and many other teams throughout the years. Jerome witnessed several Super Bowls, World Series games, Stanley Cup Finals and other championships. He also was a world class beer smuggler, and an expert in the art of finding free parking.

Jerome enjoyed visiting countries all over the world and was a huge jazz fan, as well as being a big supporter of classical music and opera. He enjoyed sitting on the sidelines and watching his kids and grandkids play their various sports - especially soccer. For those that remember him well, Jerome was rarely without something funny to say, a cigar in his mouth, a mug of coffee, and/or a beer.

Jerome is survived by his former wife Marcia Chadwick Holt, his children Geoffrey Allen Chadwick and Bonnie Allen Chadwick (married to Jim Taylor ) and his four grandsons, Jack Austin Chadwick, Owen Marlin Chadwick, Luke Henry Taylor and Joshua James Taylor. In addition, Jerome leaves his nephews Robert Allen Chadwick, John Edward Chadwick, Peter Jay Chadwick and nieces Lisa Dianne Reams and Katherine Ann Chadwick as well as many other relatives, ex-girlfriends, bemused and amused caregivers and devoted friends. His last wishes were to be cremated and have his ashes spread over a brewery.

Jerome was preceded in death by his parents, and his brother Jay Marvin Chadwick. Memorials may be made to the charity of the donor’s choice. Please feel free to raise a glass in his honor!
To order memorial trees or send flowers to the family in memory of Jerome Allen Chadwick, please visit our flower store.