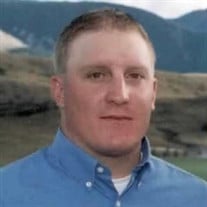 Jeremy Vincent Stanton, 44, of Lone Tree, CO passed away suddenly on Saturday October 15, 2022 surrounded by loved ones. Jeremy was born April 14, 1978 to Gary and Peggy Stanton in Sheridan, WY.

He attended school in Sheridan where he excelled in football and wrestling. He had many accomplishments including 2 state championships and becoming an All-American in wrestling. He also was 4A 2X All-State linebacker for the Broncs. After graduating, Jeremy attended SDSM&T to play football and pursue a civil engineering degree. After working for Kiewit for 15 years, he worked as a Plant Superintendent in Wisconsin and most currently as a Project Engineer for L.G. Everist in Denver.

Jeremy loved the outdoors and attending sporting events with the love of his life, Danielle Nava. He loved vacationing and fine cuisine, many times created in his own kitchen or on his grill.