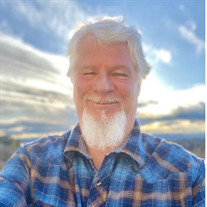 Jeffrey Alan Graser, age 61, died riding his motorcycle on Sunday, May 15th, 2022. He was born in Inglewood, CA on August 5th, 1960, to Richard and Virginia Graser. After graduating Miraleste High School, he went on to earn his Aircraft Mechanic and Aircraft Powerplant & Airframe Certificates from Northrop University in Inglewood, CA.

Jeff spent much of his life working in different capacities of corporate aviation. After working as an A & P mechanic for nearly two decades, he moved into regional sales manager positions with Garrett Aviation, Haggan Aviation and finally Standard Aero. Jeff dedicated his life to building relationships with people throughout corporate aviation. He was well-known, liked and respected by all that knew him and many considered him a friend.

In 1997, Jeff and Amelia (Moser) were married at Wayfarers Chapel in California. They went on to have 2 children, Jacob and Alexander.

Jeff had a passion for all types of motorsports. He was an avid dirt bike and dual sport adventure rider throughout the years. He enjoyed going on rides with friends across the country and was a prospective member of the Bell Brothers motorcycle club. He could always be found following up on the latest Formula 1 news or reading up on the latest new cars in Road and Track. Whether it had 2 wheels or 4 wheels, Jeff was always interested in it.

Jeff was known and loved around the neighborhood and community as someone who would drop everything to help a neighbor out. He worked as an Assistant ScoutMaster for Troop 637 for many years helping several scouts earn the rank of Eagle Scout. He took pride in helping others whenever he could. On weekends at home during the summer he could often be found in his garage working on his bike or cars with the doors open and Lynyrd Skynyrd playing on his garage stereo. During winters, he would often snowblow sidewalks and driveways on the street. He loved taking care of his yard and home planting flowers to brighten up the lives of those who passed his home.

Jeff is survived by his parents, Richard and Virginia; his brother, Peter; his wife, Amelia; his sons, Jacob (wife Samantha) and Alexander. He was looking forward to being a grandfather for the first time in June. He is dearly loved and missed by all who have known him.

A Celebration of Life will be held at Haggan Aviation on July 2nd, 2022 from 2 - 4 pm.
To order memorial trees or send flowers to the family in memory of Jeffrey Alan Graser, please visit our flower store.