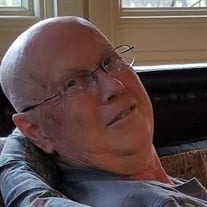 It is with great sadness and a heavy heart our family announces the passing of Jim Van Antwerp, beloved husband, father and grandfather. At 11:55am on Monday March 23 Jim passed away surrounded by his wife and two daughters at Anschutz Medical Hospital in Aurora Colorado.

Jim was diagnosed with Chronic Lymphocytic Leukemia and Large B Cell Lymphoma in the summer of 2019. He successfully completed all rounds of chemotherapy and radiation where he was in remission from his Lymphoma! To remove his blood born Leukemia, he underwent a stem cell transplant leaving him severely immunocompromised in which he died from severe medical complications, including acute respiratory failure and multifocal pneumonia. Other significant contributors to his death also included acute renal failure and toxic-metabolic encephalopathy. Jim was 65 years of age.


Jim and his wife Lisa were married 43 years. Everyone that met them knew they were soul mates from first glance. To this day if you ask Lisa what she loves most about Jim her response would be, “He always made me laugh and he is the smartest man I ever knew!” They were born and raised in Southfield Michigan where they met working for the city of Southfield. They dated 2 years before getting married in 1976. Jim graduated from Lawrence Institute of Technology with a BSEE and then pursued his MBA from Regis University. He pursued a career in Engineering for nearly 40 years. During his career he accomplished many things including leading his team to sell over 3 billion dollars in sales and working for multi-billion-dollar sales regions. He also wrote a book titled A Guide to Customer Service Excellence.

Jim always said your attitude is everything in customer service and in life. He lived these words by always having and possessing a “can do attitude.” During his time removing his Lymphoma Jim entered the hospital with a smile on his face, hugging doctors, and bringing candy to nurses. He was a problem solver, a solution finder and a kind soul. Jim had a passion for his career and strived to be excellent within any and all tasks.


Jim was a devoted husband to his wife Lisa, father to his daughters Lauren and Mary and grandfather to his grandchildren Aurora and Henry. Not only was a devoted family man, but he was a cherished father in law to Eric and Alex. A loving brother to Judy and brother in law to Royal. His friends were his extended family and he leaves behind many close and dear friends.


Jim had his passion for family, friends and his career, but he also enjoyed the outdoors. Jim’s favorite pass time was camping. He enjoyed smoking his famous brisket, cooking bacon, listening to the water steams, and breathing in fresh air. He was a social person even though if you asked him, he would disagree with conviction. His great attitude, love for life and personable demeanor made people listen to his kind heart and respect his logical train of thought.


His legacy will live on through his family and friends. His family promises to live as he did with love, logic and passion and raise their children as he did. Please always remember there are no guarantees in life, and therefore, you must live life to the fullest every day. Jim will be missed every hour of every day. We love you Pa!
To order memorial trees or send flowers to the family in memory of James Dorin Van Antwerp, please visit our flower store.