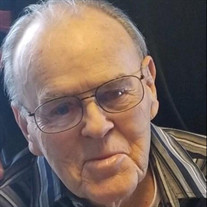 James Howard Powers passed away January 12th at his home in DeWitt with his family at his side. James was born March 16, 1928 to Kenneth and Blanche Powers at their home south of DeWitt near Turkey Creek. He was baptized at St. Augustine Episcopal Church with water from the River Jordan with several other infants on May 13, 1929. He grew up fishing and hunting in the area of Turkey Creek and the Blue River. He attended school in DeWitt and finished his high school in Formoso, Kansas when his father a Rock Island section foreman was transferred to Formoso.
After high school he spent several months working on the section out of Formoso. In 1946 he returned to DeWitt and worked as clerk at the Burlington Railroad Office. He spent his spare time learning Telegraphy with a great aunt who was an agent and operator for the Rock Island Railroad near DeWitt. After passing the Railroad Agent Rules and Regulations he began his career as an Agent and Operator on the Burlington. He worked at stations in Falls City, Bladen, Ong, and Ohiowa. In 1951 he joined the army with training at Ft. Leonardwood, Mo. While at Ong, he met Geraldine (Gerry) Thurin daughter of Roy & Evelyn Thurin and before being shipped overseas they were married at Gethsemane Lutheran Church in Ong nearly 70 years ago! He was sent to Wurtzburg, Germany for German Occupation and was a Corporal in the Transportation Headquarters. In 1953 he returned to Nebraska and was hired as agent and operator at the DeWitt Depot. Much of the work at the time required use of the telegraph and he kept up with his ability to do telegraphy. Petersen Mfg. Co was shipping Vice Grips over Railway Express, which was part of his work. He was agent for 33 years at the DeWitt station along with Swanton & Wilber during the last years in DeWitt, after the DeWitt station closed he covered and closed stations on the west branch of the Burlington from DeWitt. His last station was Beatrice where he worked as agent the last 5 years running the business in the Beatrice office and doing the shipping from the plants at Hoag. He retired and closed the station at Beatrice in 1990 after 44 years of railroading. Gerry and Jim were then able to travel to many places including Germany, France, England, Hawaii, Alaska, Canada, Sweden, Russia, the Bahamas and enjoyed taking many bus tours in the U.S.
James was a member of the DeWitt school board during the organizing of Tri County. He was a member of the DeWitt American Legion for 52 years and received the Quilt of Valor for his service in the Military.
He liked working outside and going to auctions, to add to his many collections and then being able to share and show them. In his days of growing up, marbles were a favorite boys game and he liked to tell about being Marble Champion of DeWitt grade school. Some of his friends and family knew him by his nickname of “Hoop”.
Jim and Gerry lived first at the old home place near Turkey Creek and later moved a house from DeWitt, to an acreage on the original Hobbs homestead.
They are parents of Rhonda (Jon) Vest, Omaha, Randall (Cindy) Powers, Warrensburg, MO and LuAnn Nickel, DeWitt, (and special friend RD Bruha). They have 4 grandchildren, Tiffani (Brandon) McMann, Jayson (Kirsty) Powers, Erin (Shane) Rhian, Kristin (Mick) Morgan. Ten great grandchildren, Gavin, Everett, and Mason McMann, Rylie, Cameron, Jayden, Ava and Alex Powers, Josslyn and Harrison Morgan. He leaves to mourn his passing, his wife Gerry, their children and families, niece Dianne (Dan) Bruckner, nephew, Kenny Powers, and many relatives and friends.
He was preceded in death by his parents, 2 brothers, Willard and Charles Powers and sister Marlene Powers, son in law Gary Nickel, niece, Karen Wilson, Uncle John (Hester) Hobbs, Uncle Jerry Powers, grandparents, Chris (Neumann, Hobbs) and Jesse Buss, Clyde and Jo Powers.
A Celebration of Life will be at a later date due to the Pandemic.
Memorials may be designated to the DeWitt American Legion or DeWitt Fire and Rescue and dropped off at First State Bank in DeWitt, or with the family,
.
To order memorial trees or send flowers to the family in memory of James Howard "Jim" Powers, please visit our flower store.