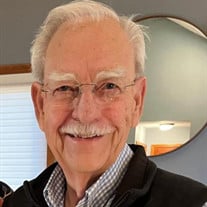 James L. Hungerford passed away on Monday September 19, 2022 in Highlands Ranch, CO surrounded by his loved ones. Jim was born on March 14, 1948 in Dodge City, KS to Lois and Lester Hungerford. The oldest of five children, he worked hard and loved his family. As a young man he moved to Wichita, KS to attend Wichita State University, making him the first in his family to attend and graduate from college. He met his wife of 44 years, Kris (Howard) Hungerford on a blind date in 1973. Together they built their lives in Wichita before moving to Highlands Ranch, CO in 1989. Jim lovingly cared for his wife as she battled Alzheimer’s disease, and after her death was lucky to find companionship in Carla Schultz. He worked as an accountant for the same company for his entire career, a reflection of his reliability and loyalty. He provided for his family in abundance and was generous in his community.

Jim’s greatest joy was his family. He was a generous and loving father to his children and Papa to his six grandchildren. His happiness was found with his grandchildren. He loved watching soccer games and gymnastic meets, going to theater performances, hosting Papa Jim summer camp, and making his famous macaroni and cheese. He enjoyed traveling internationally—to Mexico, Germany, Spain, Tortola, and West Africa—and having family vacations in Steamboat Springs, San Diego, Alaska, and Winter Park. An ever curious person, you could find Jim most days reading the news, checking in on his family, or planning his next trip. He almost always had a mustache, had a constant supply of saltine crackers and Diet Pepsi, and hated most any vegetable. Though perhaps a man of few words, you could always count on Jim to listen and to offer honest advice. He was smart, calm, and reliable, and his love was steadfast and true. His kindness extended beyond his family to his neighborhood, where he hosted the neighborhood trampoline and was a father and grandfather figure to many. He was generous in spirit and will be deeply missed.

Jim was preceded in death by his parents, Lois and Lester; his brother, John; his wife, Kris; and his grandson, Moses. He is survived by his daughters, Tiffany and Hilary; his stepson, Mike; his brother Tom and sisters Patricia and Linda; his grandchildren Sarah, Abby, Olivia, Carter, June and Elmer; and his many nieces and nephews. We ask that in lieu of flowers, donations can be sent to https://give.communityfunded.com/o/utah-valley-university/i/multicultural-student-services-center/s/african-diaspora-initiative-scholarship at Utah Valley University where his daughter works. This scholarship goes directly to students and reflects Jim’s belief in the value of education. Jim’s family will host a celebration of life on November 5, 2022 at 4pm in the Good Shepherd Episcopal church in Centennial, Colorado.
To order memorial trees or send flowers to the family in memory of James L. Hungerford, please visit our flower store.