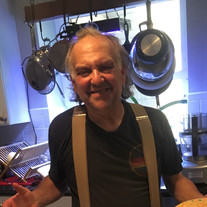 He is survived by two brothers, Robert (wife Karen) Graus of Tampa FL and Cary (wife Debbie) of Broomfield CO. He is also survived by three nephews and one niece; Brian Graus, Kelly Graus, Aaron Graus and Brianna Graus, as well as three great-nephews.

Jim graduated from Jacksonville High School in 1972 where he excelled as a football player and industrial arts student. Upon graduating, he enrolled in trade schools where he became a certified welder. After moving to California, he became a journeyman auto mechanic for Mazda. He also attended the Chicago Art Institute as he was a gifted artist.

He later learned and worked in the computer field, installing systems for business operations.

He was an avid skier and outdoors enthusiast. Always a very capable hands on guy, he was able to teach himself and master his many interests throughout life.

Jim spent his final years in semi-retirement, while continuing to do computer work for many businesses in Colorado. He lived in various parts of the state, finally landing in Parker, Colorado. The majority of his time was spent gardening, cooking, working on cars, sailing and fishing.

Jim had many good friends who became like family to him. He was a loyal and supportive friend with a love of fine wine and cigars.

A private service will be held at a future date.
To order memorial trees or send flowers to the family in memory of James C. Graus, please visit our flower store.