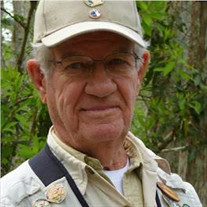 Herman E. Moll (97) passed away on August 20, 2022, at Sky Ridge Medical Center in Denver, CO. He was born near Willard, Ohio, one of eleven siblings. Herman is survived by his 6 children & their 3 spouses, 31 grandchildren/spouses, and 12 great-grandchildren with 2 more expected soon. He was preceded in death by his first wife Esther and second wife Sylvia, son-in-law Karl and 3 infant triplets.
Herman served his country during World War II while stationed on the USS Birmingham in the Pacific. Having fought in seven major campaigns, Herman received a Purple Heart and two commendation medals plus several more medals, ribbons, and stars.
Through God's great grace and provision he returned home to Ohio where he opened an electrical business serving mostly the vegetable-growing muck farmers in the area. In 1970 the family moved to South Florida where Herman was the owner/operator of Community Electric of Collier, which grew into a large company employing many. While in Florida, Herman was influential in the founding of Covenant Presbyterian Church and Naples Christian Academy, and he volunteered many hours as a boardwalk naturalist at Audubon Corkscrew Swamp Sanctuary.
When Herman retired in 1996, he relocated to Cashiers, NC in the Great Smoky Mountains where he discovered a love of photography along with some dabbling in painting and gardening on the side. Herman moved to Denver, CO in 2017 where he enjoyed time with family and friends and photographing the Rocky Mountains.
Herman’s Christian faith and Christian education were especially important to him. He rejoiced in worshipping God through nature, hymns and Bible studies. A man of deep trust in God, he will be known for sharing his faith with others as well as instilling that faith in his children. He showed his family how to ‘love one another and your neighbors and friends as yourself.’ Herman was proud of his heritage and life story. He now has soared home on eagle’s wings to rest with his eternal family.
Herman passed away with family by his side. His family wishes to thank the medical teams that cared for him at the Rocky Mountain Regional VA Medical Center and Sky Ridge Medical Center. A Celebration of Life will be held in Ohio later this year. Memorial contributions would be appreciated to:
Hope Fellowship Christian Reformed Church, 2400 S. Ash St., Denver, CO 80222 https://hopefellowshipcrc.churchcenter.com/giving
Celeryville Christian School, 4200 Broadway Rd, Willard, OH 44890 www.celeryville.org
To order memorial trees or send flowers to the family in memory of Herman E. Moll, please visit our flower store.